Contents:
What is a Randomized Clinical Trial?
History of RCTs
Phases of a RCT
Statistics used and their meanings (e.g. CI, hazard ratio, NNT)
Related Articles

What is a Randomized Clinical Trial?

A randomized clinical trial is an experiment where every person in a trial is randomly assigned to either a treatment group or a control group. A clinical trial is performed in a controlled setting (e.g. a clinic or hospital), targets a specific disease, and has an event as a measure of trial outcome (e.g. cure/no cure). 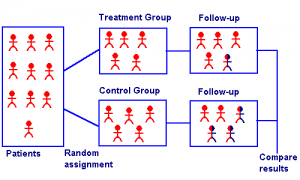 In an RCT, patients are randomly assigned to groups. Image: SUNY downstate.

The first fully controlled clinical trial was conducted by J.B. Amberson, B.T. McMahon and Pinner in 1931. Twenty-four tuberculosis patients were either given treatment (a sodium-gold concoction called sanocrysin) or were given no treatment at all. A coin flip decided who received treatment and who did not; The control group received injections of distilled water. The findings were that the two groups had no significant difference in recovery, so sanocrysin was discredited as a treatment for TB. Statistician Sir Austin Bradford Hill introduced the idea of random numbers to assign patients in the 1940s—a process that is still used today.

What is a Phase 0 Clinical Trial? 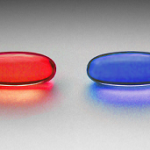 A phase 0 randomized clinical trial is the first time a drug is tested on people. The trials follow the FDA’s Investigational New Drug (IND) guidelines. The goal is to find drugs that are suitable for full-blown clinical testing. Usually, these trials have:

The purpose of a phase 0 clinical trial is to gather information about a potential drug. Researchers want to know how a drug works in the body and if it reacts in the body as expected.

Although phase 0 trials are not a requirement for FDA approval, they can help speed up the process. Drug companies often use these trials to decide which drug from a variety of candidates is the best for further testing. Phase 0 trials can eliminate drugs from further testing if they don’t behave as hoped for.

As the purpose of the trial isn’t a direct benefit to patients actually in the trial, people usually enroll to help find a cure for future patients. Sometimes enrollees are patients with advanced disease who have no other treatment options.

What to Expect in a Phase 0 Trial

Patients is these small, short-lasting trials are usually volunteers willing to accept the risk of taking a new, untested-on-humans drug. Because very small doses of the drug (typically less than 1%) are used, there is rarely a direct benefit to the patient enrolled in the trial. Small drug doses do carry a lesser risk of side effects, but exactly what side effects might happen are unknown.

In addition to being given a drug that has not been tested on humans before, patients may be required to undertake further tests and procedures, like:

Before drugs are given to humans, they are first tested on animals. Exactly what testing is required depends on the dose for the phase 0 trial. For example, a single microdose might need 7 days of testing on rodents while larger doses need 14-day repeated-dose tests on rodents and non-rodents. Drugs are also tested on surrogate tissue and/or tissue from human biopsies.

The main goal of a Phase 0 trial is to streamline the drug approval process. However, these trials can also provide valuable stats for use in future trials, like:

What is a Phase 1 Clinical Trial?

A phase 1 randomized clinical trial tests a new drug for safety and side effects. Goals of this phase are to find out:

The trials can last up to about a year and generally include 10-100 people. Placebos (sugar pills) are not used in a phase 1 clinical trial. In other words, every person in the trial will receive the experimental drug. According to the FDA, 30% of drugs fail this stage and 70% move on to a Phase 2 clinical trial. Patients are usually accepted into a single phase of a clinical trial, so people in phase 1 will probably not be in phase 2 or beyond.

Although it’s often the case that the drug has never before been tested in humans, phase 1 trials can sometimes be preceded by a phase 0 clinical trial where a few people are given a tiny amount of the drug.

The goal of a phase 1 clinical trial is to find the maximum safe dose. This is achieved by slowly increasing the dose of the drug and monitoring side effects. Although a phase 1 isn’t designed to test how well a drug works (that’s reserved for Phase 2 clinical trials), doses are given in large enough amounts that a patient might see improvement in their condition.

In a phase 1 trial, participants are divided into groups; The groups receive different amounts of the drugs (e.g. low dose, medium dose, high dose). Patients will generally not know which group they are assigned to. Randomization and blinding may be used to prevent researchers and patients from knowing who is in which group.

A sample is a small portion of a population. For example, if you have a population of 10,000 people with a certain kind of cancer, a sample might consist of 150 people. Samples in most clinical trials are convenience samples, which means that they are targeted towards a very particular segment of the population (i.e. “all patients at Mercy General with pancreatic cancer”) because that’s the group of people who are readily available. As the samples are not drawn randomly from the entire population (i.e. “all people in the USA with pancreatic cancer”), it’s difficult to run statistical tests on any data. That said, data has to be produced (otherwise no drugs would ever be accepted by the FDA), so researchers use reasonable models (like the binomial distribution for small samples or the normal distribution for larger samples) to create conservative statistics from the research results; Conservative statistics err on the side of caution.

Some common statistical concepts you’ll likely come across in clinical trials are:

Confidence intervals give you a range of values which probably contains the “true” value. For example, let’s say the average time for a cure was 5-9 days with a confidence level of 99%. That means researchers are very confident that if the experiment was to be repeated again, the average cure time would be between 5-9 days.

The mean and median are measures of “the middle.” They give you an idea of where you can expect to find average results. See:
What is a mean?
What is a median?

An odds ratio (OR) is a measure of association one property A and a second property B in a population. For example, let’s say the OR was 2 for a group of people who ate burgers at a potluck and became ill with E-coli . This means that ill people were twice as likely to eat burgers at the potluck as well people.

Primary endpoints — measures of if drugs work or not — are often tweaked in a Phase 1 clinical trial. They are the most important measure of trial “success.” For example, an endpoint could be:

The p-value (probability value) is a number between 0.00 and 1.0. It’s used to show the strength of a conclusion in a trial. Small p-values (under about 5%) indicate strong results. The smaller the p-value, the stronger the conclusion.

A statistically significant result in a trial means that the trial results show significant (promising) findings and that they have been tested with an acceptable statistical test.

What is a Phase 2 Clinical Trial?

In phase 2 clinical trials, an experimental drug is given to a large number of people to find out how effective the drug is at curing disease or alleviating symptoms.

Phase 2 Randomized Clinical Trials are the third step in bringing a drug to market. The first phase (phase 0) tests tiny amounts of a drug on a few people and gathers information about how the drug works in the body. The second phase (phase 1) tests the drug for safety by giving increasing doses to small groups of people.

Elements of a Phase 2 Trial

If a potential drug is deemed safe and effective after a phase 2 trial, the next step is a Stage 3 Clinical Trial.

For many common statistics terms used in clinical trials, see Statistics in Clinical Trials, which explains confidence intervals, endpoints and more. Some statistics are of particular important in phase 2 trials:

What is a Phase 3 Clinical Trial? 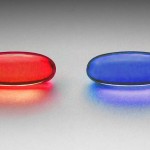 A phase 3 Randomized Clinical Trial is a large scale drug trial to find out if a drug is effective or not for a specific disease or condition. Areas investigated include:

If a Phase 3 trial is successful, an application can be made for FDA approval.

Drugs used in a Phase 3 trial have undergone previous testing on animals and small numbers of patients. The trials can last from 2 to 5 years and can involve thousands of participants of different ages, ethnicities, and genders.

Other, less common designs for a Phase 3 Randomized Clinical Trial include:

What is a Phase 4 Clinical Trial?

A Phase 4 Randomized Clinical Trial tests a drug’s effectiveness, safety, and side-effects over the long-term. The trial takes place after the FDA has approved the drug and involves thousands of patients with the indicated disease or condition. This is often the first test of the drug in the “real world.”

By the time a Phase 4 clinical trial is started, drugs have gone through several stages to reach FDA approval. They have been tested thoroughly enough to ensure they aren’t going to cause calamities when mass-marketed. However, much of the knowledge about a drug’s effectiveness, interactions and side effects is obtained after the drug hits the market.

The Phase 4 Randomized Clinical Trial can be well-controlled, randomized trials. Alternatively, they can be post-marketing surveillance, which means they are observational and non-experimental. Controlled, randomized trials are run in a similar way to Phase 3 trials. The experimental group receives the drug being studied and the control group receives another brand drug or a placebo. Patients are also randomly allocated to a control group or an experimental group. Non-experimental trials mean that the researchers don’t interfere (i.e. they don’t set up an experiment and use a control group) — they only observe and collect data.

The primary reason Phase 4 trials are run is to find out if drugs have unexpected or rare side effects. Many Phase 4 studies also study risk factors, test different formulations, dosages, and treatment durations. Interactions with other medications might also be studied, as well as how the drug compares with other medicines on the market.

One important reason that Phase 4 clinical trials exists is to provide information about generalizability. An FDA approved drug has typically been tested on, at most, a few thousand people. Once the drug hits the market, anyone and everyone can take the drug: pregnant women, people with heart conditions, diabetics…the list goes on. It’s only after mass-marketing that the drug is truly studied in depth across a wide range of ethnicities, health conditions and ages.