How to Determine Pre-Test and Post-Test Probability

There are many different ways to calculate pre-test and post-test probability. 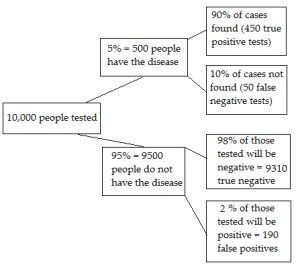 False and true positives/negatives can be used to find pre-test probability.

An alternative method is to use a likelihood ratio (LR), which combines sensitivity and specificity into a single number (Fiebach & Barker, 2007). This method is fairly straightforward (at least, compared to Bayes theorem), but you do have to work through several steps. Parikh et al. (2009) give a thorough example of how to do this. The steps are summarized below: