Treatment-As-Usual (TAU) means that the usual treatment — according to accepted standards for your particular discipline — is given to a group of participants. For example, psychiatric TAU might include psychotherapy, medication, or a combination of the two (Blais et. al, 2013). 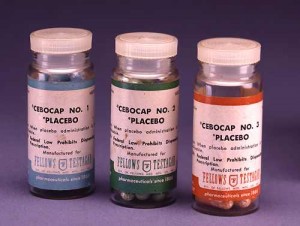 While control groups are often given placebos, TAU groups are never given ineffective treatments.

The terms TAU and control group are sometimes used synonymously, but they are not they same. The two are similar in that they are both used as tools to compare experimental results to. However, while a control is an inert intervention like a placebo, TUA can be a very active intervention. For example, an established protocol for treating major mental illness might include medication, Assertive Community Treatment (ACT), and housing programs (Gonzales, 2015).

The control/TAU are often confused, perhaps because the control is seen by many authors as not much more than an essential element of an experiment. For example, this study on Obsessive Compulsive Disorder had a TAU group that “received no treatment.” This is clearly a control group; “no treatment” is not an accepted treatment protocol for OCD; According to the OCD Foundation, the accepted treatment for OCD includes Cognitive Behavior Therapy and/or medication. In his British Journal of Psychiatry article End of the road for treatment-as-usual studies?, Tom Burns said “We pay [TAU] almost no attention, not even enough to define it properly” and goes on to note that many small studies fail to provide even the most basic information about what TAU is.