What is the Mean Value Theorem?


The Mean Value Theorem (MVT) for derivatives states that if the following two statements are true:

The special case of the MVT, when f(a) = f(b) is called Rolle’s Theorem.

There is also a mean value theorem for integrals.

Watch the video for an overview and a simple example, or read on below:

The “mean” in mean value theorem refers to the average rate of change of the function. It’s basic idea is: given a set of values in a set range, one of those points will equal the average. This is best explained with a specific example.

Note: The following steps will only work if your function is both continuous and differentiable.

Step 2: Place your answer from Step 1 into the formula in the f′ (c) position:

Step 3: Plug in the two boundaries (from the question: 2 and 9) into the formula. “b” is the highest value on the number line, and “a” is the smallest value. Make sure you put those values in the numerator and the denominator:

Step 5: Solve for x. Solid algebra skills will probably come into play for most questions:

Note: If you have two solutions (e.g. a positive and negative value), check your interval to make sure both values are in the interval. In some cases, only one of the values will be in the interval, giving you just one solution.

New extensions of the MVT are being developed all of the time, for a wide variety of applications including for one-sided differentiable functions [1] and holomorphic Functions [2].

Cauchy’s (extended) mean value theorem is a generalization of the classical MVT. It is usually stated as follows: If functions f and g are continuous of the closed interval [a, b] and differentiable on the open interval (a, b), then there is at least one point c ∈ (a, b) such that:

Geometrically, the theorem is telling us that there is a value c in the open interval (a, b) for which the tangent line to the curve at (f(c), g(c)) is parallel to the line that connects the two endpoints: 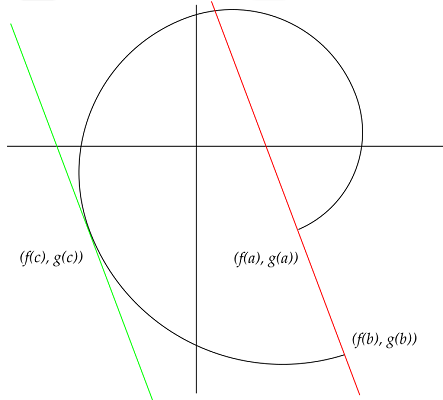 The extreme value theorem, which can be used to prove Rolle’s theorem, tells us that a continuous function contains both the maximum value and a minimum value as long as the function is:

Another way of saying this is that the continuous, real-valued function, f, attains its maximum value and its minimum value each at least once on the interval.

This theorem (sometimes called the maximum value theorem) is an “existence theorem”. It tells us that a max and min exist, but doesn’t tell us how to find them. It may seem too simple to be really important or significant, but it actually is the foundation for other theorems and is very significant in the groundwork of Calculus. It is used to prove Rolle’s theorem, among other things.

Examples of the Extreme Value Theorem in Action

The image below shows a continuous function f(x) on a closed interval from a to b. [a,b]. The absolute maximum is shown in red and the absolute minimum is in blue. 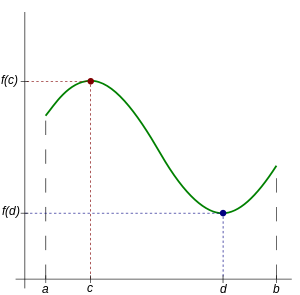 Since we know the function f(x) = x2 is continuous and real valued on the closed interval [0,1] we know that it will attain both a maximum and a minimum on this interval.

In order for the extreme value theorem to be able to work, you do need to make sure that a function satisfies the requirements:

For example, the function f(x) = 1/x on the half open interval (0,1] doesn’t attain a maximum. That’s because the interval is not closed.

The extreme value theorem itself was first proved by the Bohemian mathematician and philosopher Bernard Bolzano (of Bolzano Theorem’s fame) in 1830, but his book, Function Theory, was only published a hundred years later in 1930. Another mathematician, Weierstrass, also discovered a proof of the theorem in 1860.

The mean value theorem for integrals states that somewhere under the curve of a function, there is a rectangle with an area equal to the whole area under a curve. 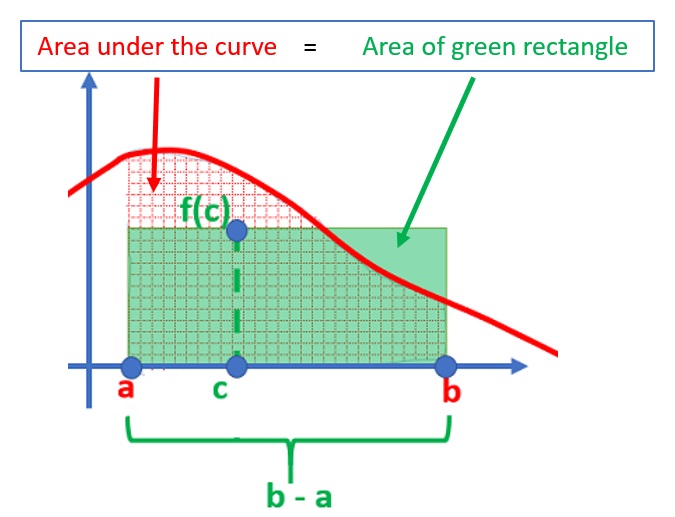 Usually, questions concerning the mean value theorem for integrals ask you to find a value for c. To answer that, you need the formal definition of the theorem.

Formal Definition of the Mean Value Theorem for Integrals

A continuous function f on a closed, bounded interval [a, b] has at least one number c in the interval (a, b) for which [1]:

In English, it’s saying that the definite integral from a to b is going to be equal, at some point, to a rectangle. The area of the rectangle is found with the equation f(c)*(a – b), which is the function value at c multiplied by the interval length.

Let’s look at an example of how you can use the formal definition to find a value for c.

Example: How to Find Point “c”

Step 3: Set the formula from Step 3 equal to your original function, replacing all x’s in the function with c’s.

We’re doing this because we’re looking for one specific point in the function that’s equal to the definite integral on the given bounds.

Step 4: Solve the right side of the equation (Step 3) for the integral bounds:

For brevity, I skipped writing down all of the algebra steps of solving for c, but you can find the steps here on Symbolab.

What is Rolle’s Theorem?

Rolle’s theorem is a special case of the mean value theorem. It states that for any continuous, differentiable function with two equal values at two distinct points, the function must have a point where the first derivative is zero. 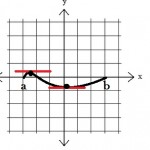 What this means is:

The standard version of Rolle’s Theorem goes like this: Let’s say you have a function f with the following characteristics:

This is illustrated by the diagram below, which shows a real-valued, continuous function on a closed interval. According to our theorem, the function equals itself at the two endpoints of the interval means that there is a point where the tangent line is horizontal. 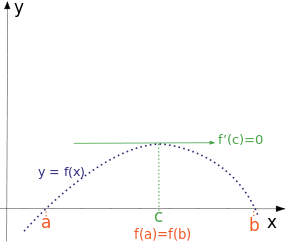 Note that Rolle’s lemma tells us that there is a point with a derivative of zero, but it doesn’t tell us where it is. It doesn’t give us a method of finding that point either. Still, this theorem is important in calculus because it is used to prove the mean-value theorem.

How to use Rolle’s Theorem

Step 1: Find out if the function is continuous. You can only use Rolle’s theorem for continuous functions.

This function f(x) = x2 – 5x + 4 is a polynomial function. Polynomials are continuous for all values of x. (How to check for continuity of a function).

Step 3: Check that the derivative is continuous, using the same rules you used for Step 1.

If the derivative function isn’t continuous, you can’t use Rolle’s theorem.

Step 4: Plug the given x-values into the given formula to check that the two points are the same height (if they aren’t, then Rolle’s does not apply).

Step 5: Set the first derivative formula (from Step 2) to zero in order to find out where the function’s slope is zero.

Rolle’s theorem has a long history: we have reason to believe it was known by Indian mathematician Bhaskara II, who lived between 1114-1185. It is named after Michel Rolle, who published a proof of the polynomial case in 1691. The name was first used in 1834, by mathematician and philosopher Moritz Wilhelm Drobisch.