Statistics Definitions > What is Simpson’s Paradox?

What is Simpson’s Paradox?: Overview.

The Paradox is named after the statistician who discovered something unusual in the 1960s. It’s a great example of how stats can be wrong. The paradox is that averages can be silly and misleading. Sometimes they can be just plain baffling.

A bit of a ridiculous example of Simpson’s Paradox:

A real-life case of the paradox happened in 1973. Admission rates were investigated at the University of Berkeley’s graduate schools. The university was sued by women for the gender gap in admissions: 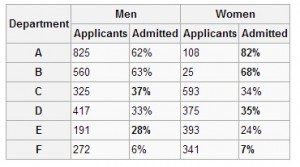 When individual departments were looked at, the admissions were actually slightly biased towards women.

This misleading average is a classic example. But how can it be possible? The answer is that women applied in large numbers to schools with low admission rates: Like law and medicine. These schools admitted less than 10 percent of students. Therefore the percentage of women accepted was very low. Men, on the other hand, tended to apply in larger numbers to schools with high admission rates: Like engineering, where admission rates are about 50%. Therefore the percentage of men accepted was very high. Even though the statistic was widely reported and caused an outrage, the average in this case, made no sense at all.