What is a Function of One Variable?

A function of one variable calculates one output value for one input value. For example, f(x) = 2x has one variable (x) and equals 4 for an input of 2:

Function of One Variable Characteristics

A function of one variable has three defining characteristics:

Notice how all the examples have just one variable in the expression: either x or t. While x and t are the more common variables, you might see others. For example, in a trigonometric function like the sine function, you might see an angle (θ) instead, e.g. f(x) = sin(θ).

If you’re just starting out with calculus, you’re working with functions of one variable, even if it isn’t explicitly stated in your textbooks or by your professor. A function of one variable is the “common” function you’ll deal with, right up until you hit multivariable calculus and complex analysis.

Function of One Variable: Types

A function of one variable fits into a subset of different types. There are many dozens of different one-variable functions, but some of the more common ones you’ll come across include:

An ordinary derivative is a derivative that’s a function of one variable, like F(x) = x2. The purpose is to examine the variation of the function with respect to one variable (x, in this example).

The term ordinary derivative is an informal term usually used to denote a “usual” or “regular” derivative, to distinguish it from other types of derivatives. For example:

Many more other types of derivatives exist. So the term “ordinary” is inserted by authors just to make it clear which derivative is which.

The weak derivative uxi is an extension of the ordinary derivative to allow for the inclusion of problematic “points” that would otherwise make useful functions non-differentiable. Weak derivatives are sometimes called distributional derivatives [1].

For example, the absolute value function cannot be differentiated on the interval [-2, 2] because of a sharp corner: 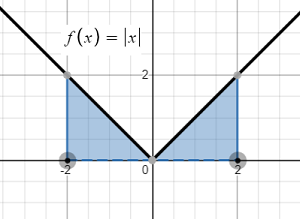 However, we can approach this problem from the backend: the function can be integrated (using integration by parts) [2]. We can then work backwards, creating a derivative that isn’t quite as “strong” as one we would have had if we could have used the usual routes for finding derivatives:

.
We could choose to include the function’s corner value at x = 0 in either interval. The choice is arbitrary and makes no difference [3]. Obviously though, this weak derivative is forced to work on a space (i.e. the problematic corner) that it shouldn’t be defined on in the classical sense. We call this forced construct a Sobolev space, named after S. L. Sobolev, who first introduced the idea of a weak derivative [4].

The piecewise function shown in the following image has a problematic corner at x = 1, which means that the ordinary derivative cannot be found at that point:


However, if the sharp corner is ignored, we can define the weak derivative:

Again, the choice of which interval to put the function value at the problematic point in (the first, second, both, or none) is not relevant.

Use of the Weak Derivative for Functions of One Variable

Weak derivatives are usually used as an intermediate step towards a solution. For example, when looking for solutions to partial differential equations, it’s often easier to ask for weak derivatives and then show the solution is differentiable in the ordinary sense [5].

A function of two variables

A function of two variables f(x, y) has a unique value for f for every element (x, y) in the domain D.

Many common functions have two inputs, including:

While a single variable function maps the value of one variable to another, a function of two variables maps ordered pairs (x, y) to another variable.

Notation for a function of two variables is very similar to the notation for functions of one variable. For example:

How to Find the Domain of a Function of Two Variables

The domain is the set of points where the function is defined. Some authors will specify the domain; Many times (especially in real life) you’ll have to figure out what makes sense.

A good starting point is to assume that the domain is all real numbers (from -∞ to ∞), then look for areas where the function doesn’t work. This is where a good knowledge of algebra will come in handy, but if you’re rusty— here are a couple of basic steps (which will catch most of the undefined areas).

Step 1: Ask yourself: Where does this make sense? If a formula is given, like A = lw, then
assume that the domain is defined for points that make sense, unless a specific domain is given. What “makes sense” will depend on the specific situation, but here are a couple of examples:

Step 2: Look for division by zero.
If a formula has x in a denominator, like this one:

Then figure out what would make the denominator zero. The function will be undefined at those points. For this particular formula, the domain is all real numbers (-&infin, ∞) except for x = ±2

Function of One Variable: References