What is the Non Centrality Parameter (NCP)?

The non centrality parameter (λ) is a measure of “…the degree to which a null hypothesis is false” (Kirk, 2012). In other words, it tells you something about the statistical power of a test. 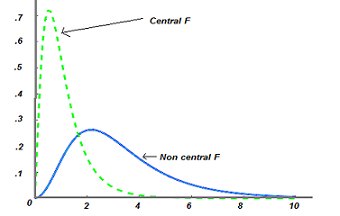 The formula for the NCP is related to the F ratio:
F = (σe2 + σΒ2 / σe2). When the variance of the group means in the numerator increases, the F ratio gets larger and the F distribution stretches to the right.

Some authors describe the Non Centrality Parameter as the degree of misspecification of a model. Others define it as a control for the shape of a distribution. Sometimes the NCP is simply defined as a “Difference in means.” One thing is clear: The term “Non Centrality Parameter” has been defined inconsistently across texts for years (Carlberg, 2014). The exact definition of the NCP depends largely on where you are reading it.

Jondeau et. al (2007) describe the NCP as a parameter that “controls the shape of the [T-distribution].”

Even the notation is up for debate: φ, δ, d, or λ? Roncoroni et. al. use the following formula for the NCP:

The recent majority seem to be in agreement that the accepted notation is λ (Carlberg, 2004). After some pretty hefty reading, I decided to skew this article towards the more commonly accepted definition of λ as it relates to the F Distribution and statistical power. There are other interpretations, so you might find the following notes useful: