Hypothesis Testing > How to Calculate the Least significant Difference

How to Calculate the Least Significant Difference (LSD): Overview

When you run an ANOVA (Analysis of Variance) test and get a significant result, that means at least one of the groups tested differs from the other groups. However, you can’t tell from the ANOVA test which group differs. In order to address this, Fisher developed the least significant difference test in 1935, which is only used when you reject the null hypothesis as a result of your hypothesis test results. The LSD calculates the smallest significant between two means as if a test had been run on those two means (as opposed to all of the groups together). This enables you to make direct comparisons between two means from two individual groups. Any difference larger than the LSD is considered a significant result.

The formula for the least significant difference is:

How to Calculate the Least Significant Difference (LSD): Example Problem

Example problem: Calculate the Least Significant Difference for the difference between two means on Group 1 and Group 2 with the following test results: 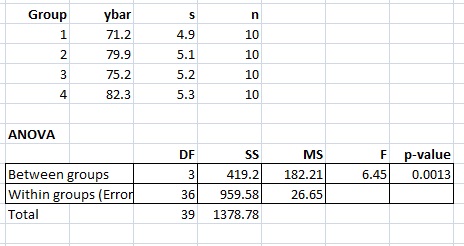 Step 2: Insert the given values, the MSE from your results (I used 26.65 from Within groups on the above table) the t-distribution value from Step 2 into the least significant difference formula:

Put this number aside for a moment,

Our value of 8.7 is larger than 4.68 so we can reject the null hypothesis.