When you use a standard normal distribution (aka Gaussian Distribution):

These facts are the 68 95 99.7 rule. It is sometimes called the Empirical Rule because the rule originally came from observations (empirical means “based on observation”).

The Normal/Gaussian distribution is the most common type of data distribution. All of the measurements are computed as distances from the mean and are reported in standard deviations.

When to use the Rule

You can use the rule when you are told your data is normal, nearly normal, or if you have a unimodal distribution (i.e. one with a single peak) that is symmetric. If a question mentions a normal or nearly normal distribution, and you’re given standard deviations, that almost certainly means you can use the rule to approximate how many of your scores will fall within a certain number of standard deviations.

The weights of stray dogs at a particular pound average 70 lbs with a standard deviation of 2.5 lbs. Assuming the weights follow a Gaussian distribution:

he 68 95 99.7 rule was first coined by Abraham de Moivre in 1733, 75 years before the normal distribution model was published. De Moivre worked in the developing field of probability. Perhaps his biggest contribution to statistics was the 1756 edition of The Doctrine of Chances, containing his work on the approximation to the binomial distribution by the normal distribution in the case of a large number of trials.

De Moivre discovered the 68 95 99.7 rule with an experiment. You can do your own experiment by flipping 100 fair coins. Note:

Empirical Rule & The Area Under the Curve

The 68-95-99.7 rule tells us the area under the curve for a normal distribution. In other words, it’s telling us values of the integral:

The integral can be evaluated for standard deviations to derive the empirical rule: 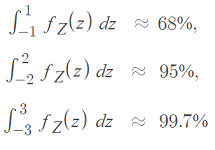 The exponential function e-z2/2 doesn’t have a simple antiderivative, so the integral has to be calculated with numerical integration. For example, as a Taylor series or with Riemann sums (Simpson’s rule is one of the better variants).

Taylor Series Steps
One way to define the exponential function e(x) is as a Taylor series for x = 0:

Using a little algebra, we can extend the definition to e-x2/2:

At 68%, the approximation for the empirical rule comes fairly close:

This type of research has four major characteristics:

Calculus forms a foundation for many quantitative research methods and is an integral part of professional empirical research.

2. Discovery of the DNA Double Helix
Watson and Crick discovered the double helix in 19531. Until their discovery, nothing was known about the structure of the smallest unit of genetic information known at the time--the gene. After many failed model-building attempts, they finally built a model that matched the known information about the gene’s structure. The actual proof of Watson and Crick’s work came much later when laboratory experiments by several researchers (including Arthur Kornberg, Matthew Meselson, Franklin Stahl and others) confirmed their findings.

This representation of DeGroot’s empirical cycle starts with observation. We notice something, and have a question about that “something” or want to change it. That leads to induction —forming a hypothesis statement. Next is deduction, where testable consequences of the hypothesis are formulated. The actual empirical (experimental) portion of the cycle comes next, followed by evaluation of the experimental results, which leads to more questions and the beginning of the cycle.

The IMRaD Format
Many papers (usually scientific ones) that feature empirical research have a layout called “IMRaD,” which stands for:

This is the same as the APA format’ the American Psychological Association uses IMRaD headings (see the Purdue OWL website for more information on formatting in APA style).

Papers that are written for empirical research should also (no brainer here) have a title. They should also have an abstract after the title, which is a summary of the paper’s contents.