What is the False Discovery Rate?

The false discovery rate (FDR) is the expected proportion of type I errors. A type I error is where you incorrectly reject the null hypothesis; In other words, you get a false positive.

Closely related to the FDR is the family-wise error rate (FWER). The FWER is the probability of making at least one false conclusion (i.e. at least one Type I Error). In other words, it is the probability of making any Type I error at all. The Bonferroni correction controls the FWER, guarding against making one or more false positives. However, using this correction may be too strict for some fields and may lead to missed findings (Mailman School of Public Health, n.d.). The FDR approach is used as an alternative to the Bonferroni correction and controls for a low proportion of false positives, instead of guarding against making any false positive conclusion at all. The result is usually increased statistical power and fewer type I errors.

In a more basic form, the formula is just saying that the FDR is the number of false positives in all of the rejected hypotheses. The information after the | (“given”) symbol is just stating that:

According to University of London’s David Colquhoun, “It is well know that high false discovery rates occur when many outcomes of a single intervention are tested.” Thanks to the power of computing, we can now test a hypothesis millions of times, which can result in hundreds of thousands of false positives.

For a more humorous (an perhaps understandable) look at the problems of repeated hypothesis testing and high false discovery rates, take a look at XKCD’s “Jelly Bean Problem.” The comic shows a scientist finding a link between acne and jelly beans, when a hypothesis was tested at a 5% significance level. Although there is no link between jelly beans and acne, a significant result was found (in this case, a jelly bean caused acne) by testing multiple times. Testing 20 colors of jelly beans, 5% of the time there is 1 jelly bean that is incorrectly fingered as being the acne culprit. The implications for false discovery in hypothesis testing is that if you repeat a test enough times, you’re going to find an effect…but that effect may not actually exist.

The odds of you getting a false positive result when running just 20 tests is a whopping 64.2%. This figure is obtained by first calculating the odds of having no false discoveries at a 5% significance level for 20 tests: 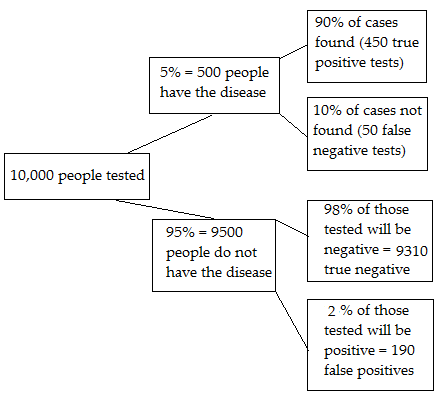 
The FDR approach adjusts the p-value for a series of tests. A p-value gives you the probability of a false positive on a single test; If you’re running a large number of tests from small samples (which are common in fields like genomics and protoemics), you should use q-values instead.

The procedure to control the FDR, using q-values, is called the Benjamini-Hochberg procedure, named after Benjamini and Hochberg (1995), who first described it.

When not to correct

Although controlling for type I errors sound ideal (why not just set the threshold really low and be done with it?), Type I and Type II errors form an inverse of relationship; when one goes down, the other goes up and vice-versa. By decreasing the false positives, you increase the number of false negatives — that’s where there is a real effect, but you fail to detect it. In many cases, an increase in false negatives may not be an issue. But if false negatives are costly or vitally important for future research, you may not want to correct for false positives at all (McDonald, 2014). For example, let’s say you’re researching a new AIDS vaccine. A high number of false positives may be a hint that you’re on the right track, and it may indicate potential for future research on the vaccine. But if you overcorrect, you may miss out on those possibilities.
Back to top

Imagine that there are 1000 hypotheses to be tested and that 100 of the Null Hypotheses are actually false and 900 of the Null Hypotheses are actually true. Let’s suppose that these are 1000 separate studies to determine whether certain foods and dietary supplements affect peoples’ health, and so each Null Hypothesis states that a certain food or dietary supplement has no effect on health. Assume an alpha-level of 0.05 is used (95% confidence). Also assume that the probability for Type II Error, beta, is 0.20 and so statistical power is 0.80. These are fairly realistic levels, although 0.80 power is probably higher (better) than many studies would have.

The 36% can be improved upon by increasing the sample sizes in the 1000 studies. This will increase power. If we increase power to 0.9, for example, we’ll increase the correct rejections from 80 to 90. Ideally, if we can increase sample size sufficiently, we can set our alpha down to 0.01, thus decreasing the 45 to 9, while also maintaining or even increasing power. With alpha of 0.01, beta of 0.10 and thus power of 0.90, we would reduce the false discovery rate to 9 / (9 + 90) = 9%. This is much better, but it’s also much more expensive to gather the
large amounts of additional data that are required.