What is a Rejection Region?

The rejection regions in a two-tailed t-distribution. Image: ETSU.edu


Watch the video for an overview:


What is a Rejection Region?
Watch this video on YouTube.

The main purpose of statistics is to test theories or results from experiments. For example, you might have invented a new fertilizer that you think makes plants grow 50% faster. In order to prove your theory is true, your experiment must:

We call this type of statistical testing a hypothesis test. The rejection region is a part of the testing process. Specifically, it is an area of probability that tells you if your theory (your “”hypothesis”) is probably true.

Two Tailed vs One Tailed

You could also have a single rejection region for “less than”. For example, “Is the growth rate less than 10cm a day?” A two tailed test, with two regions, would be used when you want to know if there’s a difference in both directions (greater than and less than).

You, as a researcher, choose the alpha level you are willing to accept. For example, if you wanted to be 95% confident that your results are significant, you would choose a 5% alpha level (100% – 95%). That 5% level is the rejection region. For a one tailed test, the 5% would be in one tail. For a two tailed test, the rejection region would be in two tails. 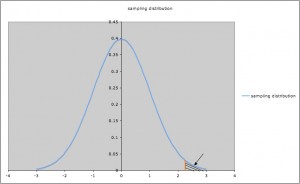 A one tailed test with the rejection region in one tail.

There are two ways you can test a hypothesis: with a p-value and with a critical value.

P-value method: When you run a hypothesis test (for example, a z test), the result of that test will be a p value. The p value is a “probability value.” It’s what tells you if your hypothesis statement is probably true or not. If the value falls in the rejection region, it means you have statistically significant results; You can reject the null hypothesis. If the p-value falls outside the rejection region, it means your results aren’t enough to throw out the null hypothesis. In the example of the plant fertilizer, a statistically significant result would be one that shows the fertilizer does indeed make plants grow faster (compared to other fertilizers).

Rejection Region method with a critical value: The steps are exactly the same. However, instead of calculating a p-value you calculate a critical value. If the value falls inside the region, you reject the null hypothesis.

Next: What is an Acceptance Region?