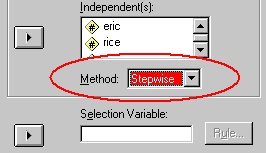 Stepwise regression is a way to build a model by adding or removing predictor variables, usually via a series of F-tests or T-tests. The variables to be added or removed are chosen based on the test statistics of the estimated coefficients. While the technique does have its benefits, it requires skill on the part of the researcher so should be performed by people who are very familiar with statistical testing. In essence, unlike most regression models, the models created with stepwise regression should be taken with a grain of salt; they require a keen eye to detect whether they make sense or not.

The two ways that software will perform stepwise regression are:

Advantages of stepwise regression include:

Although stepwise regression is popular, many statisticians (see here and here ) agree that it’s riddled with problems and should not be used. Some issues include: