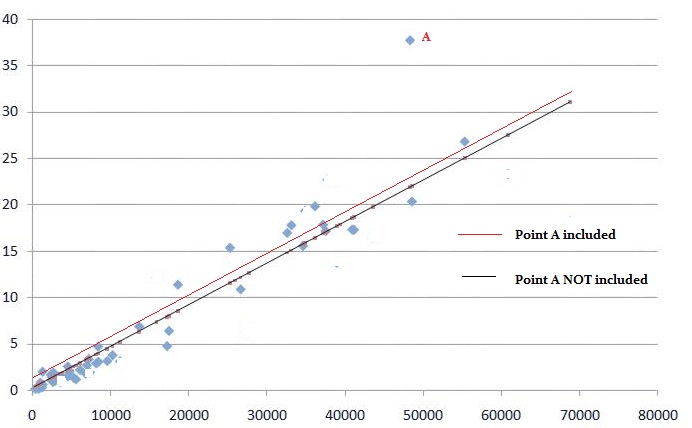 How well does your model fit the actual data?

The residual sum of squares is used to help you decide if a statistical model is a good fit for your data. It measures the overall difference between your data and the values predicted by your estimation model (a “residual” is a measure of the distance from a data point to a regression line).

In ANOVA, Total SS is related to the total sum and explained sum with the following formula:
Total SS = Explained SS + Residual Sum of Squares. Watch the video for a definition and calculation steps for Total (TSS), Between (BSS), and Within (WSS):


Sum of Squares (Total, Between, Within)
Watch this video on YouTube.
Can’t see the video? Click here.

What is the Total Sum of Squares?

The Total SS (TSS or SST) tells you how much variation there is in the dependent variable.
Total SS = Σ(Yi – mean of Y)2.
Note: Sigma (Σ) is a mathematical term for summation or “adding up.” It’s telling you to add up all the possible results from the rest of the equation.

Sum of squares is a measure of how a data set varies around a central number (like the mean). You might realize by the phrase that you’re summing (adding up) squares—but squares of what? You’ll sometimes see this formula: 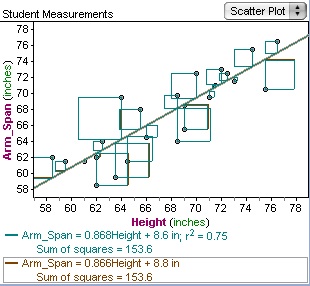 Squares of numbers, as in 42 and 102 can be represented with actual geometric squares (image courtesy of UMBC.edu):

So the square shapes you see on regression lines are just representations of square numbers, like 52 or 92. When you’re looking for a sum of squares, use the formula

; to find the actual number that represents a sum of squares. A diagram (like the regression line above) is optional, and can supply a visual representation of what you’re calculating.

Sum of Sq. in ANOVA and Regression

As you can probably guess, things get a little more complicated when you’re calculating sum of squares in regression analysis or hypothesis testing. It is rarely calculated by hand; instead, software like Excel or SPSS is usually used to calculate the result for you.

For reference, sum of squares in regression uses the equation:

And in ANOVA it is calculated with:
The total SS = treatment sum of squares (SST) + SS of the residual error (SSE)

What is the Explained Sum of Squares?

The Explained SS tells you how much of the variation in the dependent variable your model explained.
Explained SS = Σ(Y-Hat – mean of Y)2.

What is the Residual Sum of Squares?

The residual sum of squares tells you how much of the dependent variable’s variation your model did not explain. It is the sum of the squared differences between the actual Y and the predicted Y:
Residual Sum of Squares = Σ e2

If all those formulas look confusing, don’t worry! It’s very, very unusual for you to want to use them. Finding the sum by hand is tedious and time-consuming. It involves a lot of subtracting, squaring and summing. Your calculations will be prone to errors, so you’re much better off using software like Excel to do the calculations. You won’t even need to know the actual formulas, as Excel works them behind the scenes.

Sum of Squares Within