The “tails” of a distribution are, just like the name suggests, the appendages on the side of a distribution. Although it can apply to a set of data, it makes more sense if that data is graphed, because the tails become easily visible. For example, the following image shows the tails of a normal distribution:

Two tails of a normal distribution, highlighted in yellow.

The tail on the left is (perhaps not surprisingly) called a left-tail; The one on the right is a right-tail. A distribution doesn’t have to have both: it can have only one tail on one side.

Although it’s more common to refer to the tails as being on the “left” or “right”, this can pose problems if you aren’t looking at a graph. In other words, if you’re dealing with a set of data, it won’t be very clear what data should go on the left or right of a graph. The alternate name for right and left tails, which addresses this issue, is upper tail and lower tail. 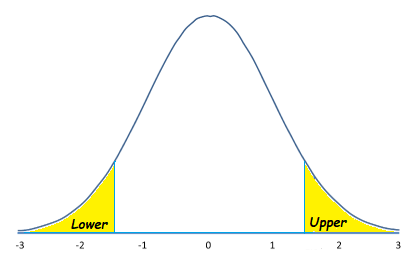 The lower tail contains the lower values in a distribution. If you graph any distribution on a Cartesian plane, the lowest set of number will always appear on the left, because the lowest values on a number line are to the left. So, “lower tail” means the same thing as “left tail”.

Similarly, the upper tail contains the upper values in a distribution. If you graph any distribution on a Cartesian plane, the highest numbers will always appear on the right, because the highest values on a number line are to the right. So, “upper tail” means the same thing as “right tail”.