Step 1: Type your data into two columns (one for your “before” or “old” data and one for your “after” or “new” data).

Step 7: Type the variances you calculated into Step 2 into the Variance 1 and 2 text boxes. 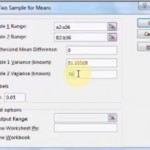 Step 8: Choose an alpha level. If it isn’t specified in the question, 0.05 is a standard value.

Warning: You can only run a two sample z test Excel if your sample size is greater than 30. Below 30, run a t-test in Excel.