You may want to read this other article first: What is Simultaneity?

What is a Simultaneous Equations Model (SEM)?

A Simultaneous Equation Model (SEM) is a model in the form of a set of linear simultaneous equations. Where introductory regression analysis introduces models with a single equation (e.g. simple linear regression), SEM models have two or more equations. In a single-equation model, changes in the response variable (Y) happen because of changes in the explanatory variable (X); in an SEM model, other Y variables are among the explanatory variables in each SEM equation. The system is jointly determined by the equations in the system; In other words, the system exhibits some type of simultaneity or “back and forth” causation between the X and Y variables.

The market for graduate nurses is influenced by:

Let’s say that the simultaneous equations model for this scenario is made up the following two equations**:

**These formulas are just regression equations tailored for this specific model; β is the regression coefficient and ε is the error term — unexpected factors that can creep into the model.

Using the Model to Solve Problems

Remember those simultaneous equations from algebra? They can be solved together to find values for x and y. In the same way, the equations in SEM can also be solved. Using the above example, let’s say you wanted to find out the partial impact of median pay (m) on both the number of employed nurses (n) and the pay rate (p). You can model this by solving the equations for n and p:

The primary variables used in Structural Equation Modeling are usually latent variables, which are compared with observed variables in the model. A latent or “hidden” variable is not directly measurable or observable. For example, a person’s level of neurosis, conscientiousness or openness are all latent variables. Latent variables are ever-present in nearly all regression analysis, because all additive error terms are not measurable (and are therefore latent).

In some specific cases structural equation modeling is used to create a model; One of the most common modeling techniques — Regression Analysis — is a special case of Structural Equation Modeling. 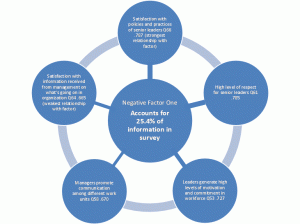 Factor analysis is a type of SEM.

Structural Equation Modeling is a general term for a set of three modeling techniques in statistics. It is usually used to confirm that a chosen model is valid. In other words, it’s used to test if a model accurately represents sample data. Unlike the bulk of statistical techniques, structural equation modeling can handle complex theoretical relationships between multiple sets of variables. This technique also takes measurement error into account, something which basic statistical techniques do not do.

Next: Index of Fit