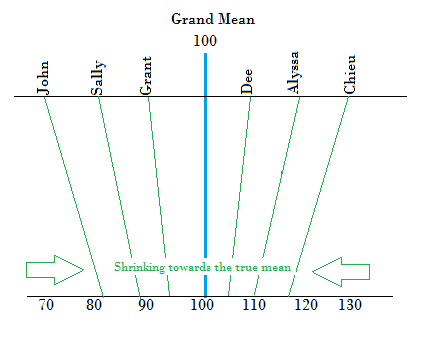 “Shrinking” scores by a percentage results in a better estimate of the true mean.

Shrinkage is where extreme values in a sample are “shrunk” towards a central value, like the sample mean. Shrinking data can result in:

However, the method has many disadvantages, including:

In Bayesian analysis, shrinkage is defined in terms of priors. Shrinkage is where:

Models that include prior distributions can result in a great improvement in the accuracy of a shrunk estimator.

What is a Shrinkage Estimator?

A shrinkage estimator is a new estimate produced by shrinking a raw estimate (like the sample mean). For example, two extreme mean values can be combined to make one more centralized mean value; repeating this for all means in a sample will result in a revised sample mean that has “shrunk” towards the true population mean. Dozens of shrinkage estimators have been developed by various authors since Stein first introduced the idea in the 1950s. Popular ones include:

Other shrinkage methods include step-wise regression, which reduces the shrinkage factor to zero or one, least angle regression and cross-validatory approaches.

Stein C. (1956). “Inadmissibility of the usual estimator for the mean of a multivariate normal distribution“. Proceedings of the Third Berkeley Symposium on Mathematical Statistics and Probability. Vol. 1. University of California Press; Berkeley, CA, USA: pp. 197–208