What is Somers’ Delta?

Somers’ Delta (Somers’ D) is a measure of agreement between pairs of ordinal variables. Ordinal variables are ordered , like best to worst or smallest to greatest (the Likert scale is one of the more popular ordinal scales.) 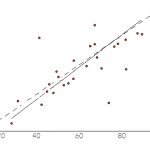 Concordance compares one set X to another, Y.

A measure of agreement tells you something about how two pairs of variables are connected. This connectivity is defined by concordance and discordance. Put simply, concordant pairs “match” and discordant pairs don’t (for a more in-depth explanation and illustrated example, see: What are Concordant and Discordant Pairs?).

Delta is an ordinal alternative to Pearson’s Correlation Coefficient. Like Pearson’s R, the range for Somers’ D is -1 to 1:

Somers’ D increases as a contingency table’s dimensions increase, but does tend to underestimate the actual degree of association in tables (Göktaş & İşçi, 2011).

Somers’ D has been defined in several ways. One way is as “the difference between the number of concordant pairs and the number of discordant pairs divided by the total number of pairs not tied on the independent variable” (Oxford Index). This definition gives you an idea of how complex it is to calculate; Finding concordant/discordant pairs is no quick task. In addition, the specific formula for Delta depends on the position of the independent variable (Göktaş & İşçi, 2011). This is one reason software is usually used to find Delta.

Both Somers’ D and Goodman and Kruskal’s gamma find associations between two ordinal variables. Unlike Goodman and Kruskal’s gamma, Somers’ D differentiates between the independent variable and the dependent variable. The difference between the two can be fuzzy, although if you know your data and the goal of your analysis (i.e. if having one variable labeled as dependent is important), it should be clear which of the two procedures to use.

Two versions of Delta exist: asymmetric and symmetric. The asymmetric version is by far the most popular and is the one you’re likely to come across when using software (e.g. SPSS). When you read about “Somers’ D” you’re probably reading about the asymmetric version (although a lot of authors don’t clarify that). A symmetric version — where both variables are ignored to be independent or dependent –does exist, so it’s wise to clarify which one you’re using before interpreting the results.