Concordant pairs and discordant pairs refer to comparing two pairs of data points to see if they “match.” The meaning is slightly different depending on if you are finding these pairs from various coefficients (like Kendall’s Tau) or if you are performing experimental studies and clinical trials.

Concordant pairs and discordant pairs are used in Kendall’s Tau, for Goodman and Kruskal’s Gamma and in Logistic Regression. They are calculated for ordinal (ordered) variables and tell you if there is agreement (or disagreement) between scores. To calculate concordance or discordance, your data must be ordered and placed into pairs.

Let’s say you had two interviewers rate a group of twelve job applicants: 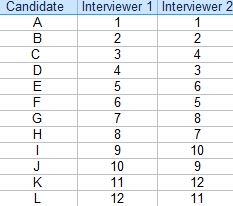 Note that in the first column, interviewer 1’s choices have been ordered from smallest to greatest. That way, a comparison can be made between the choices for interviewer 1 and 2. With concordant or discordant pairs, you’re basically answering the question: did the judges/raters rank the pairs in the same order? You aren’t necessarily looking for the exact same rank, but rather if one job seeker was consistently ranked higher by both interviewers.

Three possible scenarios are possible for these ordered pairs:

2. In Experimental Studies and Clinical Trials

The term “concordant pair” is sometimes used (i.e. in case control studies) to mean a pair who are both exposed (or both not exposed) to some factor. In other words, it is based on exposure status. In a matched pairs design, a concordant pair means that the exposure status of one case is the same as a control case.