What is an Instrumental Variable?

An instrumental variable (sometimes called an “instrument” variable) is a third variable, Z, used in regression analysis when you have endogenous variables—variables that are influenced by other variables in the model. In other words, you use it to account for unexpected behavior between variables. Using an instrumental variable to identify the hidden (unobserved) correlation allows you to see the true correlation between the explanatory variable and response variable, Y.

Instrumental variables are widely used in econometrics, a branch of economics that uses statistics to describe economic systems, and is sometimes seen in other fields like health sciences and epidemiology.

Example of an Instrumental Variable

What is Instrumental Variables Regression?

Instrumental Variables regression (IV) basically splits your explanatory variable into two parts: one part that could be correlated with ε and one part that probably isn’t. By isolating the part with no correlation, it’s possible to estimate β in the regression equation:
Yi = β0 + β1Xi + εi.

This type of regression can control for threats to internal validity, like:

In essence, IV is used when your variables are related in some way; If you have some type of correlation going on between variables (e.g. bidirectional correlation), then you can’t use the more common methods like ordinary least squares, because one requirement of those methods is that variables are not correlated.

IV regression isn’t an easy fix for confounding or other issues; In real life, instrumental variables can be difficult to find and in fact, may not exist at all. You cannot use the actual data to find IVs (e.g. you can’t perform a regression to identify any)—you must rely on your knowledge about the model’s structure and the theory behind your experiment (e.g. economic theory). When looking for IVs, keep in mind that Z should be:

Causal graphs can be used to outline your model structure and identify possible IVs.

Suppose that you want to estimate the effect of a counseling program on senior depression (measured by a rating scale like the HAM-D). The relationship between attending counseling and score on the HAM-D may be confounded by various factors. For example, people who attend counseling sessions might care more about improving their health, or they may have a support network encouraging them to go to counseling. The proximity of a patient’s home to the counseling program is a potential instrumental variable.


However, what if the counseling center is located within a senior community center? Proximity may then cause seniors to spend time socializing or taking up a hobby, which could improve their HAM-D scores. The causal graph in Figure 2 shows that Proximity cannot be used as an IV because it is connected to depression scoring through the path Proximity → Community Center Hours → HAM-D Score. 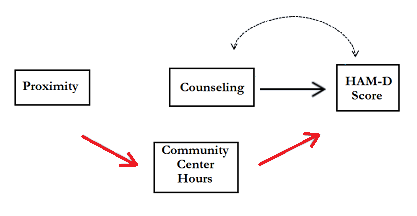 However, you can control for Community Center Hours by adding it as a covariate ; If you do that, then Proximity can be used as an IV, since Proximity is separated from HAM-D score, given community center hours.


Next, suppose that extroverts are more likely to spend time in the community center and are generally happier than introverts. This is shown in the following graph: 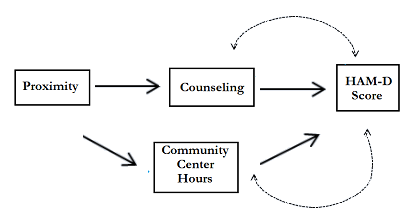 Community center hours is a collider variable; conditioning on it opens up a part-bidirectional path Proximity → Community Center Hours → HAM-D. This means that Proximity can’t be used as an IV. 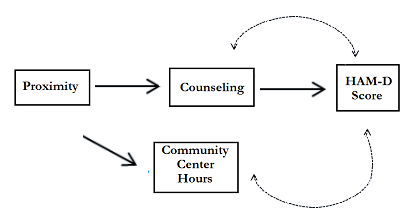 If you don’t control for community center hours and remove it as a covariate, then you can use Proximity again as an IV.