Watch the video for an example of Duncan’s MRT, or read on below.

What is Duncan’s MRT?

When you run Analysis of Variance (ANOVA), the results will tell you if there is a difference in means. However, it won’t pinpoint which means are different. Duncan’s Multiple Range test (DMRT) is a post hoc test to measure specific differences between pairs of means.

Duncan’s Multiple Range Test was originally designed by David B. Duncan as a higher-power alternative to Newman–Keuls. DMRT is more useful than the LSD when larger pairs of means are being compared, especially when those values are in a table. DMRT tends to require larger differences between means compared to the LSD, which guards against Type I error. For example, while the LSD might say a difference of means of 6 is significant, the DMRT value might be double that, guarding against the possibility of marking differences significant when they are not.

Technology is usually used to find values for DMRT. By hand, the procedure is essentially the same as that for Fisher’s LSD. The main difference is that instead of looking up the critical value in a t-table, you would look in a q-table.

Note that this test assumes you have run ANOVA and have a significant result.

Calculate DMRT for the following output: 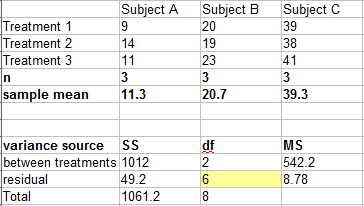 Step 1: Rank the treatments from highest to lowest mean. For this set of data, the means in order are:

The difference between the highest and lowest means is greater than 10.5, so the highest mean is significantly different from that of the lowest mean.

Step 6: Look up the q value in this table. With 2 treatments (you are excluding the highest mean now, so the q-value will change), and 6 degrees of freedom for the error term, the Q value is 3.46.

If you have more values in your table, continue down your table, changing the q-value as you go. Once you have a non-significant result, you can stop at that point.