What is the Wilcoxon Signed Rank Test?

Watch the video for an overview and how to run the Wilcoxon signed rank test by hand:

The term “Wilcoxon” is often used for either test. This usually isn’t confusing, as it should be obvious if the data is matched, or not matched.

The null hypothesis for this test is that the medians of two samples are equal. It is generally used:

How to Run the Wilcoxon Signed Rank Test in SPSS

Watch the video to learn how to run the Wilcoxon test in SPSS:

R: You can find sample code here on RCompanion.org.

How to Run the Test by Hand

Need help with the formulas? Check out our tutoring page!

Example question: Is there a difference between the median values for the following sets of treatment data for the twelve groups? 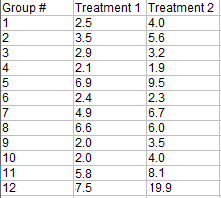 Step 1: Subtract treatment 2 from treatment 1 to get the differences: 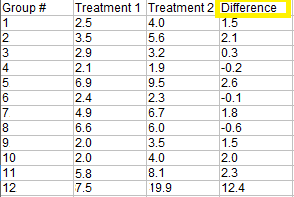 Note: If you only have one sample, calculate the differences between each variable and zero (the hypothesized median) instead of the difference between pairs.

Step 2: Place the differences in order (column 2 in the picture below), and then rank them. Ignore the sign when placing in rank order.

Step 3: Make a third column and note the sign of the difference (the one you ignored in Step 2!). 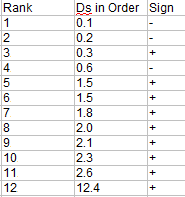 The next two steps calculate the Wilcoxon signed rank sums:

Our test statistic (7) is smaller than the critical value (13), so there is a significant difference in the medians. We can reject the null hypothesis. 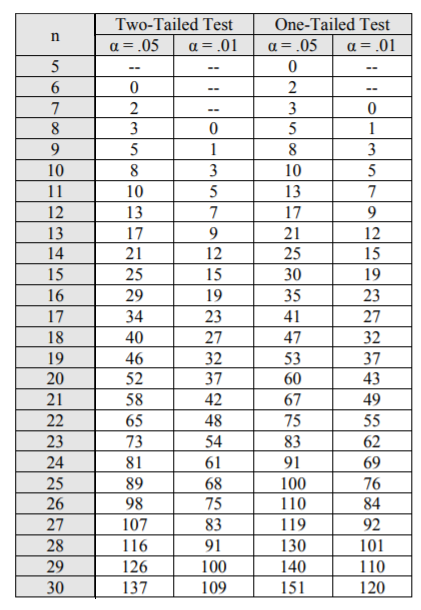