What is Variability in Statistics?

Variability (also called spread or dispersion) refers to how spread out a set of data is. Variability gives you a way to describe how much data sets vary and allows you to use statistics to compare your data to other sets of data. The four main ways to describe variability in a data set are:

The range is the amount between your smallest and largest item in the set. You can find the range by subtracting the smallest number from the largest. For example, let’s say you earned $250 one week, $30 the following week and $800 the third week. The range for your pay (i.e. how much it varies) is $30 to $800.

The interquartile range is almost the same as the range, only instead of stating the range for the whole data set, you’re giving the amount for the “middle fifty“. It’s sometimes more useful than the range because it tells you where most of your values lie. The formula is IQR = Q3 – Q1, where Q3 is the third quartile and Q1 is the first quartile. You’re basically taking one of the smallest values (at the 25th percentile) and subtracting it from one of the largest values (at the 75th percentile). The following boxplot shows the interquartile range, represented by the box. The whiskers (the lines coming out from either side of the box) represent the first quarter of the data and the last quarter.

The variance of a data set gives you a rough idea of how spread out your data is. A small number for the variance means your data set is tightly clustered together and a large number means the values are more spread apart. The variance is rarely useful except to calculate the standard deviation. 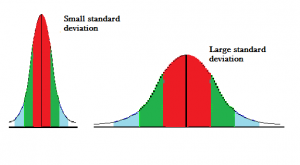