Statistics Definitions > What is Statistical Analysis? 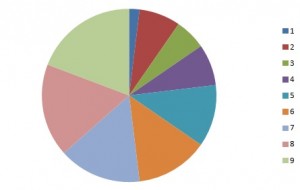 A pie chart is one way to display data.

Statistical analysis is the science of collecting data and uncovering patterns and trends. It’s really just another way of saying “statistics.” After collecting data you can analyze it to:

Statistical Analysis and the Scientific Method

Statistical analysis is used extensively in science, from physics to the social sciences. As well as testing hypotheses, statistics can provide an approximation for an unknown that is difficult or impossible to measure. For example, the field of quantum field theory, while providing success in the theoretical side of things, has proved challenging for empirical experimentation and measurement. Some social science topics, like the study of consciousness or choice, are practically impossible to measure; statistical analysis can shed light on what would be the most likely or the least likely scenario.

While statistics can sound like a solid base to draw conclusions and present “facts,” be wary of the pitfalls of statistical analysis. They include deliberate and accidental manipulation of results. However, sometimes statistics are just plain wrong. A famous example of “plain wrong” statistics is Simpson’s Paradox, which shows us that even the best statistics can be completely useless. In a classic case of Simpson’s, averages from University of Berkeley admissions (correctly) showed their average admission rate was higher for women than men, when in fact it was the other way around. For a more detailed explanation of that brain bender, see Simpson’s Paradox.

For some examples of deliberate (or plain dumb) manipulation of statistics, see: