What are Measures of Spread? 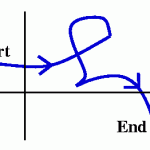 The Range tells you how much is in between the lowest value (start) and highest value (end). Image: Rutgers.edu.

The range is a basic statistic that tells you the range of values. For example, if your minimum value is $10 and the maximum value is $100 then the range is $90 ($100 – $10). A similar statistic is the interquartile range, which tells you the range in the middle fifty percent of a set of data; in other words, it’s where the bulk of data tends to lie.
See: The Range and Interquartile Range for examples and calculation steps.

Another, less common measure is the Semi Interquartile Range, which is one half of the interquartile range. 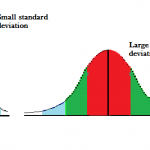 Simply put, the standard deviation is a measure of how spread out data is around center of the distribution (the mean). It also gives you an idea of where, percentage wise, a certain value falls. For example, let’s say you took a test and it was normally distributed (shaped like a bell). You score one standard deviation above the mean. That tells you your score puts you in the top 84% of test takers.
See: Standard Deviation for examples and calculation steps.

The variance is a very simple statistic that gives you an extremely rough idea of how spread out a data set is. As a measure of spread, it’s actually pretty weak. A large variance of 22,000, for example, doesn’t tell you much about the spread of data — other than it’s big! The most important reason the variance exists is to give you a way to find the standard deviation: the standard deviation is the square root of variance.

Quartiles divide your data set into quarters according to where those numbers falls on the number line. Like the variance, the quartile isn’t very useful on its own. Instead, it’s used to find more useful values like the interquartile range.

See: Quartiles for a more in depth definition and calculation steps.