What is Grubbs’ Test for Outliers?

Grubbs’ test is used to find a single outlier in a normally distributed data set. The test finds if a minimum value or a maximum value is an outlier.

Run a test for normality (like the Shapiro-Wilk test) before running Grubbs’ test. If you find your data set isn’t normally distributed, try removing the potential outlier from the data set and running the normality test again. If your data still isn’t normal, don’t run this test.

The test is a deceptively simple one to run. It checks for outliers by looking for the maximum of the absolute differences between the values and the mean. Basically, the steps are:

The formulas used will be slightly different, depending on if you want to check for an outlier in either end of the data (a one tailed test) or in both ends at the same time (a two tailed test). For simplicity, I’d recommend running a one-tailed test to start, as it a/is an easier equation to work by hand and b/ it simplifies the decision to reject (or keep) a single minimum or maximum point.

Step 1: Order the data points from smallest to largest.

Step 2: Find the mean (x̄) and standard deviation of the data set.

Step 3: Calculate the G test statistic using one of the following equations:

The Grubbs’ test statistic for a two-tailed test is:

Where:
ȳ is the sample mean,
s = sample standard deviation.

Where Ymin is the minimum value.

For a right-tailed test, use:

Where Ymax is the maximum value.

Several tables exist for finding the critical value for Grubbs’ test. The one below is a partial table for several G critical values and alpha levels. You can find the full table here. When looking up tables for G critical values, make sure you’re using the right one (i.e. a one-tailed test or two). 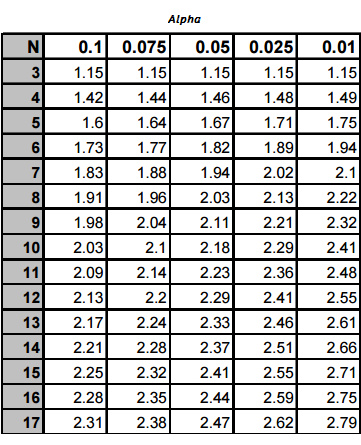 Manually, you can find the G critical value with a formula.

Where:
tα/(2N),N−2 is the upper critical value of a t-distribution with N-2 degrees of freedom.

Accept or Reject the Outlier

Compare your G test statistic to the G critical value:
Gtest < Gcritical: keep the point in the data set; it is not an outlier.
Gtest > Gcritical: reject the point as an outlier.