What is a Funnel Plot?

A funnel plot is a scatter plot of individual studies, their precision and results. 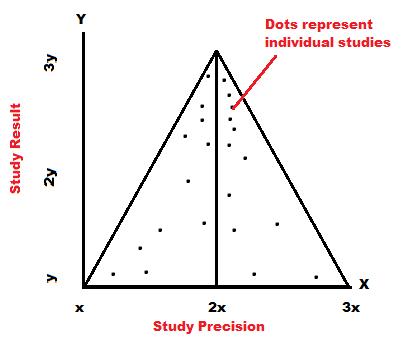 Funnel plots have the following characteristics:

What Does an Asymmetrical Funnel Plot Mean?

Funnel plots can be used as a check for bias in meta-analysis results. Asymmetry is commonly equated with publication bias and other kinds of reporting bias. However, funnel plots are not a good way to investigate publication bias (Sedgwick). There can be a number of reasons for asymmetrical funnel plots (also called small study effects). Sterne et. al (2011) list a slew of reasons, which include, but aren’t limited to:

The decision about whether a funnel plot is symmetric or not shouldn’t be based only on visual cues. Tests for asymmetry are available (one such test is Egger’s test), but they should be interpreted with caution. They may not have statistical validity, typically have low power, and they may be challenging to interpret. For a list of recommendations to follow when using these tests, see Sterne et. al’s BMJ article.