What is Publication Bias? 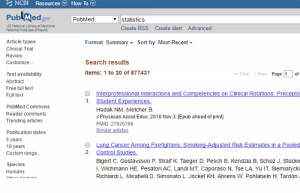 Studies with positive results are more likely to make it into journals, like these listed on PubMed.

Around 50% of studies are estimated to be unpublished. In general, those studies are more likely to have less significant or negative results; that doesn’t mean the results aren’t valid — just that journals are less likely to publish an article or delay publication if a treatment is shown to have no effect. For example, a major study which showed a deworming program in India was not effective for reducing mortality or improving weight gain was delayed from publication for 8 years (Hawkes).

This “swept under the rug” phenomeneon happens as a result of withholding negative results from publication. This may be intentional or unintentional. As well as fraud, study sponsors may provide incentives in a deliberate attempt to skew findings. Journal editors might be more inclined to publish studies that will sell copy or reap other rewards.

Publication bias refers to an entire study being excluded. Similar biases include: