What is Cochran’s Q Test?

Cochran’s Q Test is a non parametric way to find differences in matched sets of three or more frequencies or proportions. It is an extension of the McNemar test; the two tests are equal if Cochran’s Q is calculated for two groups.

The test is usually used when you have a group of people performing a series of tasks or getting a set of treatments where the outcome is a “Success” or “Failure.” Like the binomial distribution, success/failure could mean yes/no, black/white or any one of a number of success/failure options.
Examples:

Most statistical software packages (e.g. SPSS) require that your data is entered in blocks. Usually a “block” is a person, like one person taking tests ABC. Enter a 1 for success and 0 for failure. 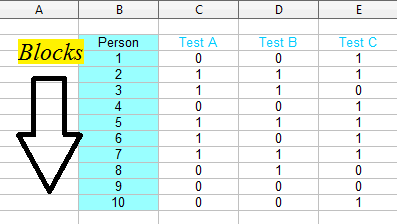 Cochran’s will tell you if there is a difference, but it won’t tell you where those differences are. If you reject the null hypothesis (i.e. the test identifies differences), perform followup pairwise Cochran’s Q tests to identify the areas which have differences.

As you probably can tell just by looking at the formula, this can quickly get ugly with multiple summations. That’s why this test is nearly always performed with statistical software.