Watch the video for three examples or read on below:

In every day use, velocity is often used interchangeably with speed.  However, in calculus there is a significant difference between the two.  In mathematics, speed refers to how fast an object travels.  Velocity, however, is defined as both the rate at which an object is traveling (i.e. how fast) and its direction.  In calculus, it is the first derivative of the position function.

As calculus is the mathematical study of rates of change, and velocity is the measure of the change in position of an object with respect to time, the two come in contact often. Finding the velocity of basic functions can be done without the use of calculus. However, when the graph of a function is curved the change isn’t constant, and performing calculus operations becomes necessary.

This gives you an object’s rate of change of position with respect to a reference frame (for example, an origin or starting point), and is a function of time. It tells the speed of an object and the direction (e.g. 70 km/h south). It is usually denoted as v(t). For example, v(t) = 2x2 + 9.

Note that this is different from the velocity equation you probably came across in algebra. The equation v = S/T gives you the average velocity of an object, given distance and time. The function enables you to find instantaneous change as well as average change. It must also meet the requirements for being a function.

The sign of the function tells you the direction the object is traveling.

If an object is traveling in a straight line (i.e. with rectiliear motion), you can use the sign to tell you whether the object is speeding up or slowing down:

Watch the video for an example of to use the function to find total distance traveled.


Displacement and total distance traveled
Watch this video on YouTube.

How to Find The Velocity Function

You can use differentiation and integration to find the function. The following image shows the relationship between the first few derivatives and integrals as they relate to the velocity function:


As an example, let’s say you were given a position function. You can differentiate it (i.e. take the first derivative) to get the velocity function. For an example of how to do this, see: Velocity of a Falling Object.

On the other hand, if you have a jerk function you’re going to want to work backwards. In other words, you need to integrate the function. How you do this depends on what type of function you have. See: Integral Rules.

1. Given a Position (Displacement) Function 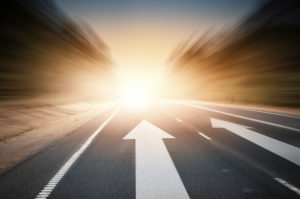 A car starts at position x = 16 feet.  After 8 seconds the car is 134 feet east of its initial position.  What is the car’s average velocity?

Step Two: Calculate the amount of elapsed time, if it isn’t explicitly stated. We know that the car traveled for 8 seconds.  No further calculations are required here.

Step Three: Plug the values into the formula and solve.

The average velocity that the car traveled was 14.75 feet-per-second eastward.

Example #1: An object falls for 1.2 seconds. What is its velocity?

The function v(t) is the derivative of the position function. If you’re given a position equation like h(t) or s(t), you’ll need to differentiate that function in order to find the velocity of the falling object.

Example problem: Frustrated with your calculus class, you attach a rocket to it and launch it down from your dorm window. The height of the book, in feet over the car after t seconds is given by the function h(t) = 200 – 16t2. The book will dent your car if it’s going more than 100 feet per second. Will your car get dented?
Hint:The given equation is not for the velocity of a falling object. It is a position function.

Step 1: Differentiate the position function, h(t) = 200 – 16t2 to get the function (you need to know the velocity to answer the question).

Step 2: Solve the position function for zero (in other words, when the height is zero) to find out when the book will hit the car.
Setting h(t) = 0 gives:

Step 3: Insert your answer from Step 2 into the function from Step 1:

Tip: A negative sign indicates the height is decreasing.

If you are given the height/distance the object has fallen (d), then use this equation to find the time (t):

If you are given the height/distance the object has fallen (d), then use this equation to find the instantaneous velocity of the object:

If you are given the height/distance the object has fallen (d), then use this equation to find the average velocity of the object: 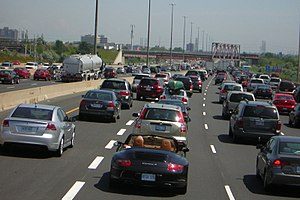 In everyday language, “speed” tells you how quickly an object travels between two places.

The formula is as follows:

S, D, and T can have different units. For example:

Sometimes “velocity” and “speed” are used to mean the same thing. However, there are very important distinctions between the two when used in calculus (or physics).

Speed takes on a more precise definition when used in calculus.  It is defined as the absolute value of velocity:

Speed is a scalar quantity represented by magnitude (i.e. an amount) and doesn’t have a direction—unlike velocity, which is a vector with both magnitude and direction.  Speed measures the rate of motion regardless of direction, and is measured in distance per units of time.  As you’re taking the absolute values, it is always positive.

We don’t really calculate “speed” in calculus, so if you’re asked a question like “how fast is the object traveling”, what the question is really asking you for is the velocity of the object.

Projectile motion is the motion of an object which has no force acting on it but the gravitational field. This type of object is called a projectile.

Watch this video for an excellent overview of what a projectile motion is (with the NFL and Lester Holt):

In the simplest kind of projectile motion problems, there is no initial velocity. An object is simply dropped so that the Earth’s magnetic field pulls it toward the ground at a rate of 9.81 m/s2.This acceleration is all in a vertical direction (i.e. toward the Earth’s surface). Gravity doesn’t have a horizontal component, and so (unlike the football in the above video), there isn’t any horizontal component to this type of acceleration: the object simply drops straight down.

For example, if you stuck your hand out of a skyscraper window and dropped an apple, it would have a velocity of 0 at the moment you opened your hand (t0). At t = 1 second, the apple would be traveling at 9.81 m/s2. At k seconds in, it would be traveling downward at a speed of 9.81m/s2k, supposing it hadn’t hit the ground yet and assuming (for simplicity) that we can ignore drag.

Suppose you are standing by the window in your building, 150 meters above the earth, and you throw your ball at an angle of 20 degrees above the horizontal, with an initial speed of 8.40 m/s.

The moment the ball leaves your hand, at t0, it is traveling at 8.40 m/s, and from that point forward the only force acting on it is gravity, which gives it an acceleration of 9.81 m/s2. The ball begins by going up, but one second later, it will already have begun moving down. You can’t add or subtract these rates directly; they are vector quantities, which means we have to pay attention to direction and add and subtract only what matches.

Let’s say that you are standing at the origin of a simple x y Cartesian coordinate system. When you throw that ball out at a 20 degree angle, its velocity will have two parts. Call them v0x and v0y. Draw a triangle, and use your geometry skills to solve for v0x and v0y.

Since we’re pretending the effect of drag is negligible, there is no force acting on our ball horizontally: ax = 0. v0x = vx = 7.893 m/s at every point until the ball crashes to the ground.