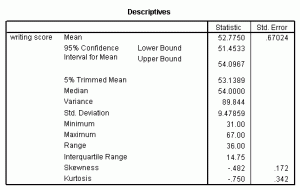 A trimmed mean is an option in descriptive statistics in many computer programs. Image: UCLA.

A trimmed mean (sometimes called a truncated mean) is similar to a “regular” mean (average), but it trims any outliers. Outliers can affect the mean (especially if there are just one or two very large values), so a trimmed mean can often be a better fit for data sets with erratic high or low values or for extremely skewed distributions.

These means are expressed in percentages. The percentage tells you what percentage of data to remove. For example, with a 5% trimmed mean, the lowest 5% and highest 5% of the data are excluded. The mean is calculated from the remaining 90% of data points.

What is the Highest Percentage?

How to Find a Trimmed Mean

Warning: This is one of those challenging terms that seem to have different meanings to different authors. Perform a Google search for trimmed mean and you’ll find some authors who state a trimmed mean of 10% is where a TOTAL of 10% of data points is removed (i.e. 5% from either side) as opposed to trimming 10% from each side. Your teacher/professor/boss will likely use the term exactly as it’s stated in this article, but you may want to clarify before you actually do any calculations.