What is Statistical Process Control?

Statistical Process Control (SPC) is a way to figure out how a process or system should behave. A model for “normal” system behavior is created with set limits. This allows variations from the norm to be identified. All systems have variation, but SPC helps you to identify when these variations are unacceptable or unpredictable.

Two types of variation happen in a system:

Many different tools can help you to investigate and monitor process control. They include:

Control charts allow you to easily see when an unusual event happens, like high numbers of defective items. Values for the upper and lower “in control” limits are chosen so that there is a small probability of interrupting an in-control process. A common limit is “three sigma”, which creates the cut-off points at three standard deviations above and below the mean.

Control charts (sometimes called Stewhart charts) are typically used to keep an eye on the quality of a process (for example, a manufacturing line in a factory). The two basic types are:

Control charts differ by the type of data that you’re working with. For example, you could create:

Control limits also have upper and lower boundaries, but they are not related to specification limits at all. Control limits are boundaries for the expected variation in the process. They are probabilities that tell you if your process is working in statistical control. 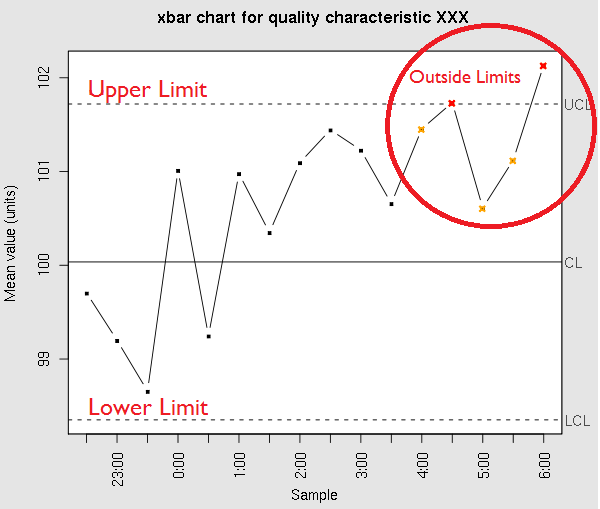 Control limits are defined by the amount of risk you are willing to accept. In the United Kingdom, control limits are usually stated as a probability. For example, an upper 0.002 limit means 2 out of one thousand. In the United States, they are commonly defined as 3 standard deviations from the mean (“three sigma”), which is approximately equivalent to a 1 out of one thousand probability (i.e. 0.001).

Just because all of your points fall within the control limits doesn’t mean that your process is working just fine. For example, if your plot is non-random, it may be an indication that there’s something wrong. Therefore, control charts are typically used as an indicator for out-of-norm, rather than an indicator that everything is working fine.