What is the Pareto Principle?

Simply put, the Pareto Principle is an unscientific “law” that states: 80% of effects come from 20% of causes. In other words, most of what we do has little effect. The principle comes from the Pareto distribution and illustrates that many things don’t have an even distribution. It was originally written by Italian economist Vilfredo Pareto in 1896, who stated that 20% of the population in Italy holds 80% of the wealth. In the 1930s-1940s, Dr. Joseph Juran recognized the principle can be applied universally to almost any situation where there is an uneven distribution. For example:

I could go on with a list of dozens of these “Paretoisms.” If you want some more examples, check out J.Motil’s Paretoism’s page.

The numbers don’t have to add up to 100%. And there doesn’t have to be an actual 80-20 split in the distribution. In fact, you’ll rarely come across a distribution of anything that’s exactly 80-20, although many things come close. The main idea behind the principle is just to recognize that a small number of cases produce a large percentage of the effect.

The distribution split isn’t always unfair, and it doesn’t always need “fixing.” For example, 80% of traffic travels on 20% of the roads. This can be beneficial for maintenance crews who can concentrate on that 20% of roads; it can also be great for residential neighborhoods, who benefit from reduced traffic flow.

Many of us want to more effectively manage our time, so that we concentrate on the 20% of tasks that are important. If you want to put the Pareto Principle into action in your life so that you are less distracted with small tasks (or distractions), Harvard Business Review suggests prioritizing tasks that you have to take care of each day:

I usually write or revise one article for StatisticsHowTo.com every day. I prioritize in a slightly different way, allowing myself “free time” as long as I keep on schedule to put in 5-6 hours writing. What this sometimes means is I end up writing until 2 a.m. if I procrastinate. But I wake up the next day feeling like I accomplished something the day before. Things that I would like to get done, but don’t get around to (low-priority stuff like working on my art, checking Google Webmaster for errors, or looking for a gift) simply get postponed until the next day. I keep on reminding myself that Warren Buffett didn’t make his fortune by habitually checking his email, thinking about dinner, or shopping Amazon for the latest cool book. While I’m on the subject of Warren Buffett, here’s what his philosophy is (quoted by Mary Buffett and David Clark in The Tao of Warren Buffett):

“Warren decided early in his career it would be impossible for him to make hundreds of right investment decisions, so he decided that he would invest only in the business that he was absolutely sure of, and then bet heavily on them. He owes 90% of his wealth to just ten investments.”

Everyone has a different way of prioritizing. A lot depends on your job situation, your family life, your other responsibilities. The key is to find your own way to prioritize. And stick to it.

The Pareto Principle in Business

The Pareto principle is often used as a business tool. For example, Paula Rooney published this insight into Microsoft’s use of the rule on October 3, 2002:

General ways you can apply the rule to your business:

Pareto Analysis and the Pareto Diagram

Pareto analysis is a statistical way to identify the 20% of tasks or problems that you should be concentrating on. The usual way of identifying those tasks is with a Pareto Diagram. There isn’t a whole lot of difference between a plain old bar chart and a Pareto diagram, except that the chart ranks your items from greatest to least.

The Pareto diagram lists categories of what is taking up the time/resources along with a relative frequency (adding up to 100%). The Pareto diagram is basically a vertical bar chart with categories listed in order of magnitude, from left to right. This allows you to easily see which tasks or resources make up the top 20%. 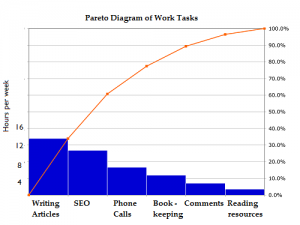 Relative frequency is calculated as follows:
(Category contribution / Total) * 100%
Let’s say you spend 13.5 hours out of a 40 hour work week on a particular task. You would get:
(13.5/40) * 100 = 33.75%
You can then plot these figures on a chart to more clearly see what you’re spending the most time on. The chart shows hours spent in blue bars (with a legend on the left) and percentage of time as the orange line (with a legend on the right). For example, the category “Writing Article” takes up 13.5 hours (left sidebar), which is about 35% of time spent (right sidebar).

Options to make your Pareto Diagram:

The Pareto Principle and My Jeopardy Challenge

I’m a big Jeopardy fan. This year I think I’m going to try out for the show. As the Pareto principle is applicable to just about anything in the universe, I started to wonder if the Pareto Principle could be applied to the Jeopardy learning curve. In other words:

One thing I know for sure is that when I take the online test, I’d better be in the top 20% of the estimated 100,000 test-takers. Jeopardy doesn’t release numbers, but you do need to get above 35/50 (that’s 70%). If you pass, you’re then in a random drawing. And then, if you get invited to the audition and pass that, you’re in a contestant pool.

That’s a lot of unknowns. So the only thing for sure is that I need to be better than the majority of other contenders. Which means I’ll have to put in a lot more effort than the majority of people. Or, I use the Pareto Principle to become a more successful contestant by placing maximum effort into the activities more likely to make me a success.

There’s a book out there called “Secrets of the Jeopardy Champions.” You can bet that there aren’t any secrets in that book (seeing as it’s been a constant seller for 20+ years!). It does give you lists of things to study, which is definitely useful. But seeing as every potential Jeopardy contestant is also going to buy the book and study from it, that hardly puts me in the top 20%.

Here’s how I’ve been using the Principle to study (for 30 hours a week!):

And the winner was…studying flashcards of historical Jeopardy questions. If you’ve added up all of those weeks, you’ll find that I spent a month on preparation before I sat down for some serious studying. I’m betting that 80% of potential contestants won’t put that much effort into the preparation. And I’m also betting that putting my effort into historical Jeopardy questions (rather than random trivia), that I’m placing my effort into the right place to get the maximum result.

As the 200,000 or so questions in the J-Archive are a little overwhelming, I narrowed my focus to those questions that are more likely to come up than others. For example, out went questions about news for some years and in went general science. I’m more likely to be asked what the first cervical vertebra is (the Atlas) rather than a news story from 1991. I won’t post all the ways I did that in this article (I’ll probably make a separate post in the future), as I’ll be getting way off topic. My point is that you can pretty much use the Pareto Principle for anything you want in life, even if it’s something as random as wanting to appear on Jeopardy.

Other Names for the Pareto Principle