Watch the video for three examples of how to find the geometric mean:

What this formula is saying in English is: multiply your items together and then take the nth root (where n is the number of items).

The π symbol in the formula is product notation: It’s the mathematical notation for “product”, similar to the (probably more familiar) Σ in summation notation.

How to Find the Geometric Mean (Examples)

Note: The power of (1/3) is the same as the cubed root 3√. To convert a nth root to this notation, just change the denominator in the fraction to whatever “n” you have. So:

Example 4: The average person’s monthly salary in a certain town jumped from $2,500 to $5,000 over the course of ten years. Using the geometric mean, what is the average yearly increase?

Tip: The geometric mean of a set of data is always less than the arithmetic mean with one exception: if all members of the data set are the same (i.e. 2, 2, 2, 2, 2, 2, then the two means are equal. 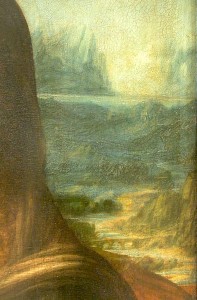 *If you do this calculation, it’s slightly different because of the number of decimal places I wrote here. In other words, you should get the exact result on a calculator.

Why not use the Arithmetic Mean Instead?

As you can probably tell, adding 1.53 to your initial price won’t get you anywhere, and multiplying it will give you the wrong result.

Technology Options for Calculating the GM

The geometric mean has been used in film and video to choose aspect ratios (the proportion of the width to the height of a screen or image). It’s used to find a compromise between two aspect ratios, distorting or cropping both ratios equally.

Computers use mind-boggling amounts of data which often has to be summarized using statistics. One study compared the precision of several statistics (arithmetic means, geometric means, and percentage in the top x%) for a mind-boggling 97 trillion pieces of citation data. The study found that the geometric mean was the most precise (see this Cornell University Library article).

When solving this proportion, x=√ a*b

In this image, triangles ADC, ADB, and CAB are similar.

If you have similar triangles, you can use the proportion to find missing sides. For example, the leg rule states that: hypotenuse/leg = leg/projection. These types of problems appear in high school geometry classes.

2. Golden Ratio
The golden mean has a value of about 1.618 and can be derived from the geometric mean and similar rectangles. Let’s say you have a rectangle with width “a” and length “b”. Create a square within the rectangle with sides “a”: 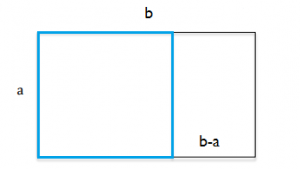 The Geometric Mean has many applications in medicine. It has been called the “gold standard” for some measurements, including for the calculation of gastric emptying timesJNM.

As the examples at the beginning of this article demonstrate, the geometric mean is useful for calculating proportional growth, like the growth seen in long term investments using the Treasury bill rate as your riskfree rate (the riskfree rate is the theoretical return rate on a risk free investment). According to NYU corporate finance and valuation professor Aswath Damodoran, the geometric mean is appropriate for estimating expected returns over long term horizons. For short terms, the arithmetic mean is more appropriate.

The Human Development Index (HDI) is an index that takes into account factors other than economic development when reporting a country’s growth. It is “…a summary measure of average achievement in key dimensions of human development: a long and healthy life, being knowledgeable and have a decent standard of living. The HDI is the geometric mean of normalized indices for each of the three [categories].”UNDP
The “normalized” indexes refer to the fact that the geometric mean isn’t affected by differences in scoring indices. For example, if standard of living is scored on a scale of 1 to 5 and longevity on a scale of 1 to 100, a country that scores better in longevity would score better overall if the arithmetic mean were used. The geometric mean isn’t affected by those factors.

Test results for water quality (specifically, fecal coliform bacteria concentrations) are sometimes reported as geometric means. Water authorities identify a threshold geometric mean where beaches or shellfish beds must be closed. According to CA.GOV, the dampening effect of the geometric mean is especially useful in water quality calculations, as bacteria levels can vary from 10 to 10,000 fold over a period of time.
Back to Top

As you can see, the ratios are the same. This tells you that the geometric mean is a sort of “average” of all of the multipliers you are putting into the equation. Take the numbers 2 and 18. What number could you put in the center so that the ratio of 2 (to this number) is the same as the ratio of this number to 18?

You can get the same result (6) by using the formula, so if you’re ever presented the above type of problem in a math class, just find the square root of the numbers multiplied together:
√(2 * 18) = 6 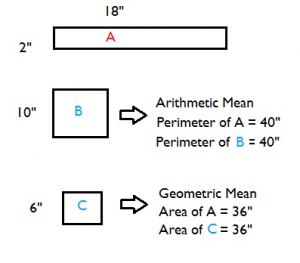 Logarithmic Values and the Geometric Mean

One way to think of the geometric mean is that it’s the average of logarithmic values converted back to base 10. If you’re familiar with logarithms, this can be a very intuitive way to look at it. For example, let’s say you wanted to calculate the geometric mean of 2 and 32.

Step 1: Convert the numbers to base 2 logs (you can theoretically use any base):

Generally, you can only find the geometric mean of positive numbers. If you have negative numbers (common with investments), it’s possible to find a geometric mean, but you have to do a little math beforehand (which is not always easy!).

Example: What is the geometric mean for an investment that shows a growth in year 1 of 10 percent and a decrease the next year of 15 percent?

The geometric mean for this scenario is 0.99. Your investment is slowly losing money at a rate of about 1% per year.

The Arithmetic Mean-Geometric Mean Inequality (AM-GM inequality) states that for a list of non-negative real numbers, the arithmetic mean is greater than or equal to the geometric mean. Taking the formulas for both types of mean, we get the inequality:

For example, for the sequence of numbers {9, 12, 54}, the arithmetic mean, 25, is greater than the geometric mean, 18. The multiple proofs of this inequality are beyond the scope of this statistics site, but Bjorn Poonen offers this simple one line proof for the AM-GM inequality with two variables:

Antilog of a Geometric Mean