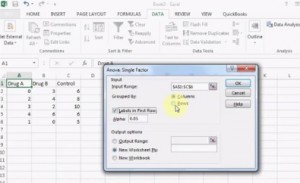 Step 6: Choose an alpha level. For most hypothesis tests, 0.05 is standard.

Step 7: Click “OK.” The results from ANOVA will appear in the worksheet.

Check out our YouTube channel for more Excel stats tips.