What is a Sample Space?

The sample space of an experiment is all possible outcomes for that experiment. For example:

The more items you throw in the mix, the more complicated it becomes. How do you make sure you don’t miss an item?

Example problem: If shoes come in 6 styles with 3 possible colors, how many varieties of shoes are there?

You can see why you might not want to draw out the entire sample space. Can you imagine writing out all 132,600 possibilities?

The Counting Principle also works for more than two events.

Sample spaces introduced in early probability classes are typically discrete. That is, they are made up of a finite (fixed) amount of numbers. For example, if you roll a die, the sample space (Ω) is [1, 2, 3, 4, 5, 6]. Rolling a twenty-sided die or choosing a card from a deck all produce discrete sample spaces. A continuous sample space is based on the same principles, but it has an infinite number of items in the space. In other words, you can’t write out the space in the same way that you would write out the sample space for a die roll. With a continuous sample space, you would still be writing numbers long after the sun has imploded into a black hole.

The following image shows a continuous sample space— an area 2 units high and 2 units wide. Imagine that the space represents a game where a dart is dropped into the space and lands on a random spot. What are the odds of the dart landing on the spot pictured? 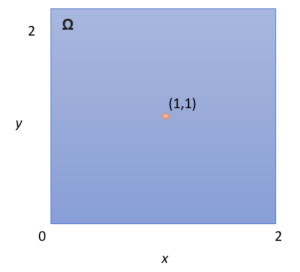 It may surprise you to learn that the odds of the ball landing on either of those two spots is zero. In fact, the odds of the dart falling in any spot at all equals zero. Let’s say the dart lands at (1, 1). It could also land a hair to the right, at (1.001, 1). Or, an even tinier fraction to the right, at (1.0000000001, 1). If you try and write down all of the possible places the dart could land, you won’t be able to, because there are an infinite number of spaces the ball could land on. If you have a problem with this logic, you aren’t alone. It’s an example of how we think the world works, and how it actually works. A famous example of how infinity messes with logic is Zeno’s paradox (also known as “&helli[;the hare can never overtake the tortoise in a race”).