In Factor Analysis, communality may be denoted as h2.

A variable’s communality ranges from 0 to 1.

In general, one way to think of communality is as the proportion of common variance found in a particular variable.

Relation to Error and Specific Variance

Communality (aka common variance) is intertwined with unique variance. The two types of variance make up 100% of the variable’s variance.

Unique variance is in turn made up of specific variance and error variance. Specific variance has something specific to do with your model/survey. For example, if you were performing factor analysis on results from a questionnaire to evaluate depression, a recent divorce would certainly account for some variance. Something fairly unrelated (like the subject didn’t get any sleep the night before the test because they were binge watching Friends) would be error variance.

The relationship between all of these different types of variance is best explained with an image: 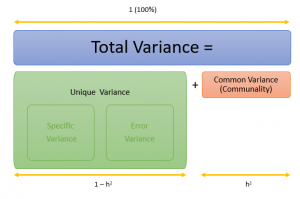 One way to define communality is in terms of the sum of squared loadings on each principal component (McGarigal et al., 2013):