The term “U statistic” can have several meanings:

Unbiased “U” statistics are a way to construct unbiased estimators to study large sample behavior; the “U” in U-statistics stands for “unbiased”.

Constructing U-statistics involves use of a kernel— a symmetric real valued function h(x,y). An (Unbiased) U statistic is any statistic that can be placed into the following form:

Although they look complicated, a U statistic is really just a type of generalized average (Abraham et. al, 2013).

In L-estimation, Kaigh (1983) proposed a type of non-parametric U statistic as a quantile estimator.

Wharton University’s J. Scott Armstrong gleaned the following formulae from Theil’s original works; the same formula for U2 appeared in Brown and Rozeff (1978): 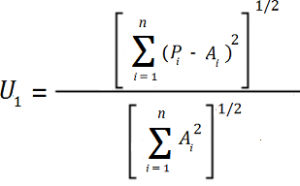 U1 is a measure of forecast accuracy . 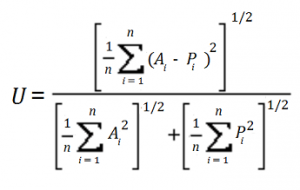 U2 is a measure of forecast quality.

If you perform a Google search for Theil’s U, you’ll find an interesting assortment of different formulae, each purporting to be “Theil’s U”. According to Armstrong, the existence of multiple formulas “…has caused some confusion.” For example, the occasional author refers to the Uncertainty Coefficient (unrelated to the U statistic) as Theil’s U, because Theil originally worked on its derivation. The end result is that if you need to use Theil’s U for some reason, the best idea is to refer to Theil’s original formulae, shown above. That said, if you’re reading about Theil’s U in the literature, you may want to make sure that the author is using the correct formula.