Guttman’s lambda-2 (Guttman’s λ2) is a reliability estimate. λ-2 is the second in a series of 6 lambda’s proposed by Guttman in 1945. Lambda-1 was intended as a starting point for reliability analysis. From the 6 lambdas, lambda-2 and lambda-3 (which is equivalent to Cronbach’s alpha) are the most commonly used.

The formula for Guttman’s lambda-2 is:

Where σi,j is the covariance between items i and j.

You probably don’t want to calculate λ-2 by hand: the computations can get excessive, especially with larger tests. Many statistical packages can compute λ-2, including R And SPSS: 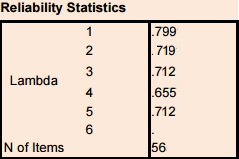 Ideally, every test should be able to differentiate between test-takers’ abilities (otherwise there wouldn’t be any point in testing!). General rules of thumb for interpreting reliability estimates, including λ-2:

Notes:
What are Parallel measures?

Parallel measures are equivalent in content, response processes and statistical characteristics. For example, several tests exist for calculating IQ scores, and these are generally thought to be equivalent, or parallel.

What is Randomly equivalent?