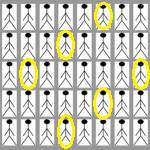 Your target population is the group you want to know more about.

Target population is an informal term used mostly in epidemiology. It’s general defined to mean a group or set of elements that you want to know more information about.

Most of the time, “target population” and “population” are synonymous. However, adding the word target emphasizes that sometimes we miss the mark in sampling, and don’t always hit the mark: samples can be unrepresentative of the population that you originally intended to sample. For example, you might want to survey all the hospitalized adults in the United States (the target population), but budget constraints limit your survey to hospital patients just four cities in the U.S. The sampled population and targeted population in this scenario are likely to be quite different.