What is the Relative Variance?

The relative variance (RV) is a measure of error, or how much the “noise” of a data point or set of data points can vary. RV doesn’t have a universal definition, and it isn’t used very often in statistics except in very informal terms. Different definitions include (in no particular order):

This one makes the most sense to me personally, although I’m sure other opinions differ. Hermance (2013) defines the RV in terms of rainfall. The variance of rainfall at a certain station is composed of three different variances. The RV is used to “…define the effect that the variability of rainfall for a given month has on the variability of the rainfall over the entire season for the station.” It’s a relatively simple definition, with this formula (where sd = standard deviation):

I found a single reference to another (very similar) formula, in a U.S. Department of Commerce publication, which defined RV as “the variance divided by the square of the estimate.” 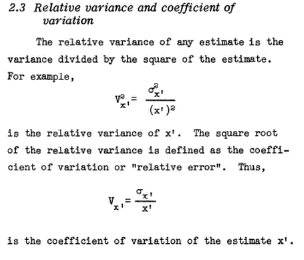 The last part might be a lesson in how many definitions for can become confusing. It reads that the “…square root of the RV is defined as the coefficient of variation“.

This doesn’t equate, so be careful when you’re using the RV as a calculation.

In sum, there isn’t a standard formula, so be very careful if using this statistic — you may end up confusing your readership.