Funnel charts can be used to illustrate stages in a process — usually sales processes. However, they could be used to show anything that’s decreasing in size. For example, you can use this type of chart to show:

These charts are similar to pie charts, because the total area of the colored bars is 100%. For example, you might have:

Essentially, a funnel chart is a differently-shaped pie chart.

A funnel chart usually shows an overall decrease at each stage. When the stages increase, it’s called a pyramid graph.

Step 1: Type your data into two columns. For example, type the categories into column A and the numbers into column B — as in the above image.

Step 2: Select all of the data.

Funnel charts are only available in Excel 2016. Earlier versions of the software do not have this feature.

A funnel plot is not a synonym for funnel chart. A funnel plot is a scatter plot of the effect of a treatment vs. a measure of study precision or size. While funnel charts have bars showing stages, funnel plots have points for each data point. Essentially, the only thing they have in common is their overall shape. 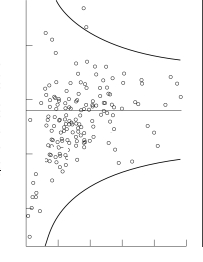