What is a Pyramid Graph?

A pyramid graph is a chart in the shape of a triangle or pyramid. These charts are best used when your data is organized in some kind of hierarchical way. The levels indicate some kind of progressive order, like:

A population pyramid is a type of pyramid graph that shows the distribution of age groups for a particular country, area, or group. The graphs tends to be shaped like a pyramid because (perhaps, obviously), everyone is born at age 0. The top of the pyramid — usually around 90 to 100 years old — contains a tiny fraction of the population. These graphs are especially good for shows comparisons between age groups, like the following U.S. Census Bureau chart that shows the age range of males and females in Zambia:

The name Pyramid Graph is a little bit of a misnomer, because although it is a hierarchical-type graph, it isn’t always in the shape of a pyramid. For example, the following graph from the Census bureau resembles a house more than a pyramid: 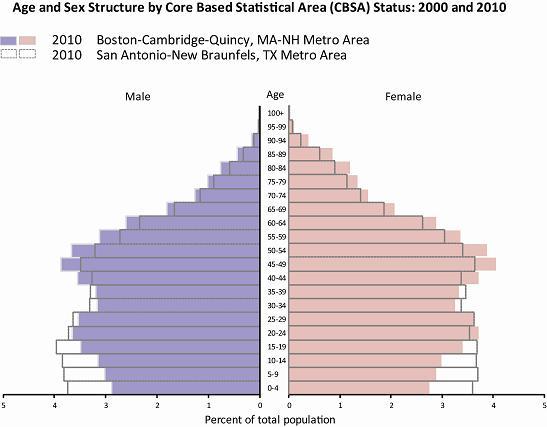 Each side of this pyramid graph shows data for one area (Boston-Cambridge-Quincy metro area and San Antonio-New Braunfels metro area).