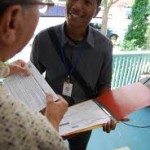 Survey questions should be carefully worded so that they do not influence the respondent.

Wording bias, also called question-wording bias or “leading on the reader” (Gerver & Sgroi, 2017) happens in a survey when the wording of a question systematically influences the responses (Hinders, 2019).

If a survey question asks if people agree that “Welfare helps people to get back on their feet,” then people are more likely to support welfare. However, if the question is worded as “Welfare pays people who don’t work,” then it’s more likely to result in a negative response.

Questions might be deliberately worded to elicit a positive or negative response (called deliberate bias), but many times the questions are biased due to the question writer’s unconscious biases (Bennett, 2009).

One example of deliberate bias is in missing options. For example:
Q. What is your opinion of big corporations?
a. Evil
b. Too big
c. Unfavorable.

Anchoring is the question/answer equivalent of “leading the witness.” For example, you might ask “Given that immigrants cause 80% of the crimes in the city, do you think we should restrict immigration?”. This particular question could be reworded, without bias, as “Do you think we should restrict immigration?”. Similar to anchoring is asking loaded questions. For example, “Should we forbid sick children from attending school?” contains a loaded word (forbid). The bias could be removed simply by asking the respondent if they agree or disagree with sick children attending school.