What is Kelly’s Measure of Skewness? 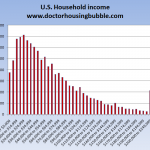 Kelly’s Measure of Skewness is one of several ways to measure skewness in a data distribution. Bowley’s skewness is based on the middle 50 percent of the observations in a data set. It leaves 25 percent of the observations in each tail of the distribution. Kelly suggested that leaving out fifty percent of data to calculate skewness was too extreme. He created a measure to find skewness with more data. Kelly’s measure is based on P90 (the 90th percentile) and P10 (the 10th percentile). Only twenty percent of observations (ten percent in each tail) are excluded from the measure.

This formula is not practically used. In fact, Kelly’s measure of skewness is rarely used at all, even in its more common form, which is measured as coefficient of skewness:

What does Kelly’s Measure of Skewness Tell us?

Kelly’s Measure of Skewness gives you the same information about skewness as the other three types of skewness measures (Bowley skewness, Pearson Mode Skewness and Momental Skewness.). 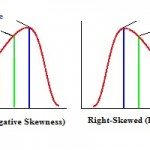