Berkson’s paradox (also known as Berkson’s fallacy or Berkson’s bias) is the counter-intuitive idea that events which seem to be correlated actually are not.

Take two events, A and B, which are completely independent events (for example, lung cancer and diabetes). If a study selects for both the presence of A (lung cancer) and B (diabetes), the presence of diabetes will make the presence of lung cancer more likely. Intuitively, this makes no sense, but the data seems to back this counter-intuitive notion up, showing that there is, in fact, a connection.

Berkson wrote about the paradox in 1946. His original paper showed that two diseases, which have no real relationship, can be what he called ‘spuriously associated‘ in hospital-based case control studies. However, the idea wasn’t widely accepted until 1979, when David Sackett of McMaster University provided strong evidence that Berkson’s paradox does, in fact, exist.

The reason that the probability of event A happening is higher in the presence of event B happens because cases where neither occur are excluded.

In a classic case (from Everitt’s Medical Statistics from A to Z: A Guide for Clinicians and Medical Students), data from autopsies was analyzed. Fewer cases than expected of cancer and tuberculosis were found together, implying that tuberculosis is somehow protective against cancer. However, the real reason that rates appear to be lower are because not all autopsies are included in the study; people with both cancer and tuberculosis may, for one reason or another, have lower rates of autopsy.

To understand this, consider a particular children’s hospital during an influenza scare. We’re going to prove the counter-intuitive idea that having influenza offers some protection against appendicitis.

There will be some overlap; we assume a child with appendicitis is just as likely to get flu as any other child, and a child with flu can still have appendicitis. The percent of appendicitis patients with influenza would be 10 % of 10%, (0.10 * 0.10 = 0.01) or 1% of hospital patients.


Now let’s calculate a new percentage: a non influenza child’s chance of having appendicitis.
You are choosing from all the children in the yellow boxed area (70 children) below. 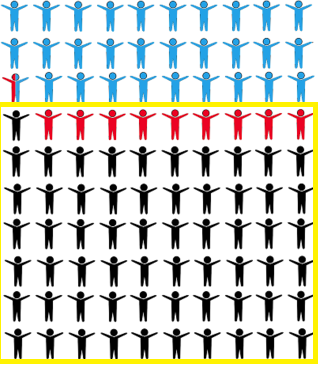 You know the following:

So we can calculate the new percentage: a non influenza child has a 9 / 70 = 12.9 / 100, or ~12.9 % chance, of having appendicitis. That’s higher than the 10% rate of appendicitis among all children.
So even though these two events are entirely independent, the inner-hospital statistics make it look like having influenza is some small insurance against appendicitis.

Ellenburg, Jordan. Why Are Handsome Men Such Jerks? Slate Magazine. Retrieved from http://www.slate.com/blogs/how_not_to_be_wrong/2014/06/03/berkson_s_fallacy_why_are_handsome_men_such_jerks.html on April 3, 2016

Everitt, B. (2006). Medical Statistics from A to Z: A Guide for Clinicians and Medical Students. Cambridge University Press.