What is Benford’s Law?

Benford’s law (also called the first digit law) states that the leading digits in a collection of data sets are probably going to be small. For example, most numbers in a set (about 30%) will have a leading digit of 1, when the expected probability is 11.1% (i.e. one out of nine digits). This is followed by about 17.5% starting with a number 2. This is an unexpected phenomenon; If all leading numbers (0 through 9) had equal probability, each would occur 11.1% of the time. To put it simply, Benford’s law is a probability distribution for the likelihood of the first digit in a set of numbers (Frunza, 2015).

The law only works for the significand* S(x) (Hill and Berger, 2017), which is essentially any number placed into a standard format. To find the significand:

The formula for the Benford’s law is:

Where “d” (the leading digit) is a number from 1 to 9.
For example, the probability of the first digit being a 1 is:

The following image shows the probability distribution for all digits:


Benford’s law can also be used to make predictions about what the second, third and subsequent leading digits will be as well as the probabilities for certain number combinations.


Benford’s law doesn’t apply to every set of numbers, but it usually applies to large sets of naturally occurring numbers with some connection like:

The law usually doesn’t apply to data sets that have a stated minimum and maximum, like interest rates or hourly wages. If numbers are assigned, rather than naturally occurring, they will also not follow the law. Examples of assigned numbers include: zip codes, telephone numbers and Social Security numbers.

One practical use for Benford’s law is fraud and error detection. It’s expected that a large set of numbers will follow the law, so accountants, auditors, economists and tax professionals have a benchmark what the normal levels of any particular number in a set are.

Although it’s called Benford’s law, he wasn’t the first person to study the phenomenon. Astronomer Simon Newcomb (1881) — future president of the American Mathematical Society — laid the foundations for the law after looking logarithm tables. He noticed that the first pages were more worn and smudged than later pages. Newcomb concluded “the first digit is oftener 1 than any other digit” and published his findings in Note on the Frequency of Use of the Different Digits in Natural Numbers, which appeared in The American Journal of Mathematics. Newcomb included a table for probabilities of 1st and 2nd digits, d: 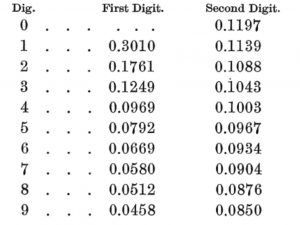 Benford published his findings in the article The Law of Anomalous Numbers in Proceedings of the American Philosophical Society (1938). As an example, he found the following percentages in Reader’s Digest (total count, 308 instances):

Benford noted himself that an individual data set, such as this one, may not fit the law. However, the mean of a large number of data sets will.

The law is hard to prove mathematically, as it’s more akin to a theory that works (sort of like the multiplication rule). Many attempts have been made to explain the phenomenon, ranging from Benford’s initial thoughts about the logarithmic nature of data to Hill’s probability framework which used mixtures from different probability distributions to partially explain it. At the time of writing, there hasn’t yet been a complete answer to the question of why it works. But work it does — kind of. Diaconis and Freedman (1979) suggest Benford was rather liberal with how he rounded off numbers, to make the data better fit the equation. 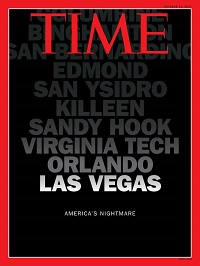 Perhaps the best way to convince yourself the law works is to pick up a random book or magazine and list/sort the numbers — about 30% of the numbers collected from any issue will start with the number 1. I did this myself, for the Oct 16, 2017 issue of Time. This just happened to be the nearest reading material to where I was sitting, which could probably qualify as random seeing as there’s a lot of books and magazines at my house.

Some things I noticed on the nature of numbers

These may partially explain why there are more more “1”s than any other number:

In conclusion, it should seem obvious that there will be more “1”s than any other number, because this is where we start to count anything.