1. What is the Pygmalion Effect?

“When we expect certain behaviors of others, we are likely to act in ways that make the expected behavior more likely to occur.”(Rosenthal and Babad, 1985)

Although the team wrote about both positive and negative feedback, the Pygmalion effect only refers to the positive feedback effect. The opposite is called the Golem Effect.

2. History of the Pygmalion Effect 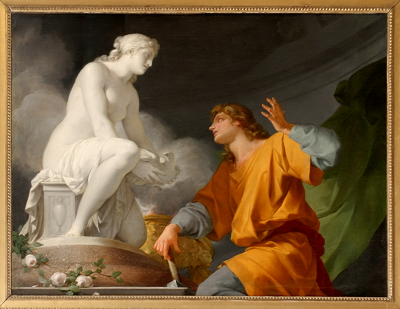 The Pygmalion effect gets its name from the mythical sculptor, Pygmalion. Ovin described the Cypriot in his book Metamorphoses (Book X). The story is an extreme example of how positive reinforcement can lead to good results. Pygmalion carved a statue of a woman and wished for a bride that looked just like it. He made offerings to Aphrodite, and after he kissed the statue (named Galatea) it came to life. They fell in love and lived happy ever after. The moral to the story? If a statue can be that affected by positive reinforcement, presumably the effect would be a hundredfold on an actual human being.
Back to top.

The Rosenthal effect, also called the Experimenter Expectancy Effect, is a special case of the Pygmalion effect that pertains to experiments and experimenter bias (Martin & McIntyre, 1994). If a researcher believes that their experiment is likely to results in a particular outcome, that bias will effect how the researcher conducts their work. The results will very likely sway towards the direction the researcher wanted, invalidating any study results. Methodological precautions can guard against the Rosenthal effect. For example:

Some authors use the terms Pygmalion effect and Rosenthal effect interchangeably. This isn’t incorrect per se (so many authors use it this way that it’s difficult to say they are wrong), but it is more common for Rosenthal effect to mean only the effect seen in research.

Rosenthal and Jacobsen’s original research took place with elementary schoolchildren at the Spruce School. All the children took intelligence tests, although the results weren’t actually important. The researchers used the test “results” to lead the teachers to believe some children were smarter than others. First, they randomly selected 20% of the children. They then lied to the teachers, telling them that these children had “…unusual potential for academic growth.” The only difference between any of these children was, according to Rosenthal, “…in the mind of the teacher.” Eight months later, the children sat tests again and the children with “potential” scored much higher.

Rosenthal and Jacobsen’s research paved the way for decades more research into the Pygmalion effect. In education, experiments have taken place at all educational levels, including college and military schools. These studies have shown that the Pygmalion effect takes place through all educational levels. One study even showed that teacher expectations of a child’s ability in preschool linked to the child’s high school GPA (Alvidrez and Weinstein, 1999). One reason the effect happens in education is because a teacher that believes their students are very capable will be more likely to give tough assignments. The opposite is also true: if teachers believe students don’t have much ability, their classroom assignments will probably reflect that.
Back to top.

The effect occurs at advanced school levels as well as for younger students. For example, college students who take college prep courses in high school are more likely to graduate than students who don’t take any college prep classes (Boser et al, 1999). Many inner city high schools don’t offer any of their students Advanced Placement(AP) classes. In 2006*, I asked the administrative staff of one such school (Andrew Jackson in Jacksonville Florida) why they didn’t have any college prep courses.* The response was (sadly) “…these kids can’t handle AP classes.”

Major Wilburn Schrank (1968) looked into the Pygmalion effect (which he called the “labeling effect”) at the Air Force Academy Preparatory School (ages 17 and over). Whole classes were labeled as “more” or “less” talented. Schrank found that “differences between means of these “more” or “less” talented groups were statistically significant at the 10% alpha level. Schrank concluded that “This shows that a labeling effect undeniably exists in ability grouping situations.”

The Pygmalion effect has been known about for decades. So why not use it to raise expectations across the board? The main problem is that in hundreds of experiments since Rosenthal and Jacobsen’s work, there has only been an effect when the effect was subliminal (i.e. when people are misled into acting a certain way). In other words, if teachers try to be encouraging on purpose, there is no Pygmalion effect. It only works if the teachers are encouraging students subconsciously.

* This experience with Andrew Jackson happened in 2006. From what I hear, the school does offer a limited amount of AP classes now.
Back to top.

Before the school experiment, Rosenthal worked with lab rats. He asked a group of student researchers to run experiments on rats who were specially bred to be either great at running mazes (“maze bright” rats) or terrible at mazes (“maze dull”). There was no difference between the rats at all. In fact none of the rats had any experience in the type of maze used in the experiment. When the hoodwinked researchers ran tests with the rats, there were marked differences in performance between the two groups of rats. The “maze bright” rats did much better at the maze than the “maze dull” rats.

The experiment raised many questions, such as how a physician’s expectations might affect a patient outcome in a clinical trial. The double-blind experiment, where neither the physician nor the patient know if they are receiving the real drug or a placebo, is one way to avoid the problems of expectation.
Back to top.

One of the most famous examples of the Pygmalion effect in literature can be found in George Bernard Shaw’s Pygmalion. The play, later adapted for the screen as My Fair Lady, explores how positive and negative reinforcement can be transforming. Cockney Flower girl Eliza Doolittle turns into a proper-speaking English lady. She states:

“…can be fairly strong within some management contexts…but may vary widely depending on moderating variables. Specifically, results were stronger in the military, with men, and when involving persons for whom low expectations were initially held.”

5. What is the Golem Effect?

The Golem effect is another self-fulfilling prophecy where students or employees perform poorly because of expectations to do so. The term “Golem Effect” was also coined by Rosenthal; He based the idea on on the mythical clay figure the Golem, created to eradicate evil but ended up a monster. Reeves (2016) uses the Golem effect to explain why women are often subordinated in the workplace and given more menial tasks:

If a male manager has low expectations of women as compared with men, even if these expectations are unconscious, he may place them in lower-level jobs or give them less-challenging tasks…women may in fact perform at a level worse than their male counterparts because of the low expectations of their bosses.