Sometimes log x is written with no subscript. This is always because the writer thought it was obvious which base was meant, and the base must be inferred either from the specific context or from the general discipline.

The most commonly used bases for logarithms are 10, e, and 2.

The base 10 logarithm, log10x, tells us what exponent 10 has to be raised to make a given number. Log10 is called the common logarithm, and it is often used in engineering and science applications.

The logarithm with the number e at its base is called the natural logarithm and is often abbreviated ln; so loge x = ln x. Remember that e is a special irrational number which we can’t write as a finite decimal; the first few digits are 2.718. The natural logarithm is important in both math and physics.

The base 2 logarithm is called the binary logarithm, and is often used in computer science. It is sometimes abbreviated lb.

Some special properties of logarithms make them very easy to use in computation. Here are the basic logarithmic laws:

Now and then you’ll come across a logarithm or two in stats, although they aren’t widely used. If you’ve worked with logarithms before (perhaps in algebra), you may remember having to rearrange logs and solve some pretty complex equations like log2(x) + log2(x-2) = 3. You probably won’t see these types of equations in elementary statistics, but you might see the occasional use of a log like log2.

The logarithm function, f(x) = logbx is the inverse of the exponential function. These functions are used occasionally in error measurement, especially when using least squares to fit a linear forecasting model to logged data. A model’s error statistics fitted to natural-logged data are approximate measures of percentage error (Nau, n.d.).

Examples of Logarithms in Real Life

The Richter scale is a logarithmic scale. It is also one of the best examples of how graphs (and statistics) can lie. Why? You’ve probably heard that when an earthquake struck Haiti in 2010 was a 7.0 on the Richter scale or that the Great Japan Earthquake of 2011 was a 9.0. But did you know that the Japan earthquake was about one hundred times more powerful than the earthquake in Haiti? That’s difficult to digest, judging by that two point jump. 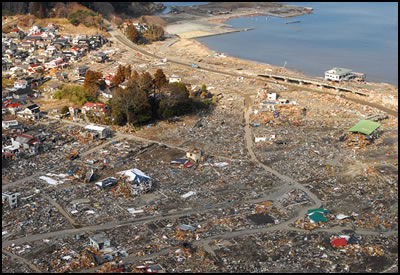 In the following chart, one erg is equal to 10−7 joules.

Can we predict earthquakes?

Yes, and no. Earthquake statistics help scientists to predict where and when an earthquake might take place. However, predictions are only possible when there is adequate historical data —and a lot of it. That means there are a few, well-studied areas (like Parkfield, CA) where scientist can make somewhat accurate predictions about where and when earthquakes might occur. So in general, the Richter scale can’t be used to predict earthquakes.
Back to top