What is an Interaction Effect?

For example, let’s say you were studying the effects of a diet drink and a diet pill (the explanatory variables) on weight loss. The “main effects” would be the effect of a diet drink on weight loss, and the effect of the diet pill on weight loss. The interaction effect happens when the drink and pill taken at the same time. It’s possible the combination could speed up weight loss, or even slow it down. Synergy in medicine, where two drugs work together to produce an effect greater than their additive individual effects, is a special case of an interaction effect.

The two (or more) variables that interact with each other to produce an interaction effect are called the interacting variables. If the variables don’t act upon each other at all, then we say there is no statistical interaction, or that one explanatory variable’s effect is constant across all levels of the other. 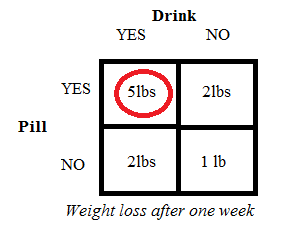 An interaction effect exists between the drink and pill, resulting in increased weight loss when taken together.

The simple image above shows that you would need four variations on treatment in order to fully investigate interactions:


Factor analysis isn’t limited to two levels (called a two-way interaction): it can be applied to multiple levels.